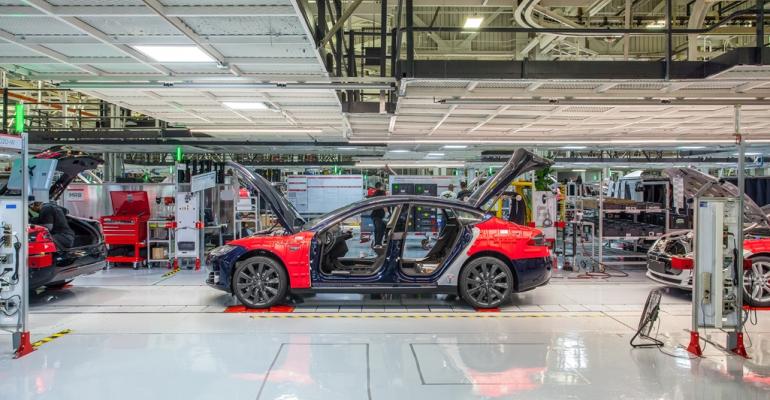 Tesla Lashes Out at UAW Over Work-Conditions Complaint

Allegations of unfair labor practices are &ldquo;meant only to generate headlines,&rdquo; the automaker says in a statement after receiving an official NLRB complaint.

Tesla blasts the UAW after the National Labor Relations Board hands down a complaint against the electric-car maker as it pushes to fill orders for the new, more affordable Tesla Model 3 sedan.

“As we approach Labor Day weekend, there’s a certain irony in just how far the UAW has strayed from the original mission of the American labor movement, which once advocated so nobly for the rights of workers and is the reason we recognize this important holiday,” Tesla says in a statement released after the complaint was made public.

“An overwhelming loss at a Nissan plant earlier this month, corruption charges that were recently leveled against union leaders who misused UAW funds and failure to gain traction with our employees, it’s no surprise the union is feeling pressured to continue its publicity campaign against Tesla,” the automaker says.

For seven years, “the UAW has used every tool in its playbook: misleading and outright false communications, unsolicited and unwelcomed visits to the homes of our employees, attempts to discredit Tesla publicly in the media, and now another tactic that has been used in every union campaign since the beginning of time – baseless (unfair labor practice) filings that are meant only to generate headlines,” Tesla says, adding the charges “are entirely without merit.”

The launch of the Model 3 requires a steady increase in the tempo of production of at Tesla’s Fremont, CA, assembly plant, CEO Elon Musk has acknowledged.

The NLRB is set up to be independent, though the tenor of its rulings does follow the politics that shift with changing leadership in the White House. President Trump is expected to make the NLRB more conservative, but the board’s staff is generally neutral.

The charges against Tesla were signed by the director in the NLRB's Regional Office in Oakland, CA. Tesla is required to answer the charges in writing on or before Sept. 14 and a hearing on the complaint will be held Nov. 14.

The UAW emphasizes the NLRB has found merit to allegations by workers that the company violated their rights by requiring them to sign an overly broad confidentiality agreement that could bar them from talking about their working conditions and safety issues at the facility.

Tesla also was charged with numerous acts of intimidating and harassing workers and otherwise violating workers’ rights under federal labor law, the union noted in a statement.

Workers have raised concerns about health and safety, compensation and their right to speak out. This is despite signing a document indicating they may face termination or criminal prosecution for speaking publicly about what they observed at work or their working conditions.

“I knew the company couldn’t legally prevent us from speaking out about issues at the plant, but the confidentiality policy confused a lot of my coworkers and made them fear that they didn’t have certain rights,” says David Gonzalez, a Tesla production associate. “This NLRB Complaint will help people realize they have the right to speak up when they see something that isn’t right. I’m proud of my coworkers who filed these charges and stood up for us.”

Jonathan Galescu, a Tesla production associate, says, “For as long as I’ve been at Tesla, it’s been clear to me that it’s up to the workers to make sure that we’re safe and treated fairly. I joined others in filing the charges for myself, but I also did it for my coworkers – they need to know we have rights, and that we can speak up about what we are seeing and experiencing.”

The UAW has lined up more than 50 different community groups as well as other labor unions from across the San Francisco Bay Area to support its organizing drive. Historically, the Bay Area has been a stronghold of organized labor, going back to the 1930s.

UAW President Dennis Williams says the union will not press prematurely for a vote at the Fremont factory. High turnover at the plant is not only a challenge for Tesla but also the UAW, observers have noted.

UAW Focuses on Safety in Tesla Organizing Effort
May 30, 2017