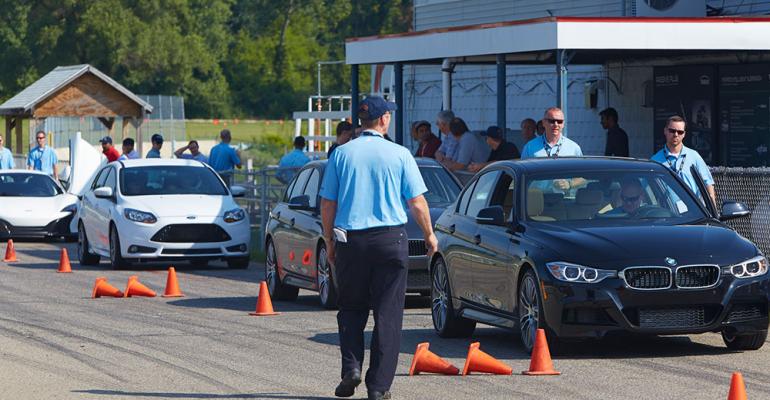 CLARKSTON, MI – Auto enthusiasts are aware of the benefits of electronically controlled suspensions, but most vehicle buyers are not.

The systems have been available on a variety of cars and trucks since 2000, but market studies show that except for purchasers of expensive performance and luxury cars, consumer awareness is low and the average take rate is less than 5%.

Suspension supplier Tenneco is hoping to increase market penetration by raising awareness of the advantages of the systems among mainstream consumers, car dealers and its OEM customers.

With this goal in mind, the supplier recently hosted a multi-day event at the Waterford Hills Raceway here to showcase its advanced suspension technologies to customers and journalists on a variety of vehicles, from a European version of the Volkswagen Golf to the ’15 McLaren 650S supercar.

Tenneco’s “intelligent” suspension systems combine electronics with hydraulic valves to adjust shock absorber damping levels to road conditions, as well as speed and cornering inputs, to achieve an optimal balance between ride comfort and vehicle handling. The systems typically have three or four settings that range from a cushy comfort-oriented ride to tightly controlled sport handling.

They also improve vehicle stability and reduce body movement during lane changes and avoidance maneuvers, which increases the driver’s feeling of comfort and safety, Jackson says.

In the early years of development, the technology was unimpressive and gimmicky, with the “sport” setting just delivering a harsher version of “comfort.” But more recent systems have proved their value to driving enthusiasts. Virtually all supercars with prices ranging from six to seven figures use intelligent suspension systems and about 25% of performance-oriented luxury buyers also choose the option, Tenneco says.

A recent study commissioned by the supplier shows that if mainstream consumers are given the chance to test-drive intelligent suspension systems back-to-back with conventional systems, they recognize the value of the technology and are willing to pay a premium for it.

The study also found drivers of mainstream vehicles such as SUVs, compact cars and higher-priced family sedans all rate the driving experience with semi-active suspensions significantly higher than those with conventional suspensions.

“The research results confirm intelligent suspension systems deliver benefits that consumers notice and prefer, most notably that there is no need to compromise between ride comfort and handling,” Jackson says. “Consumers feel that intelligent systems reconcile these differences to give drivers the benefit of both, and they value the ability to vary their ride at a touch of button.”

The study also reveals a lack of awareness of the technology and its benefits as main reasons intelligent suspensions are not a more popular option.

To bolster the contention intelligent suspensions would see greater acceptance if consumer awareness was raised, Tenneco invited engineers and executives from its OEM customers to see for themselves on two low-speed handling courses set up at Waterford.

WardsAuto attended on a separate day set aside for journalists. We tested a Euro-spec version of the latest-generation Golf currently equipped with a Tenneco semi-active intelligent suspension back-to-back with a conventional U.S.-spec Golf and the McLaren 650S supercar featuring Tenneco’s most-advanced semi-active system.

Even though we were limited to a maximum speed of just 45 mph (72 km/h) on the track, a series of handling maneuvers and simulated potholes, rough pavement and railroad crossings make a convincing case for electronically controlled suspensions.

We’ve spent a lot of time in the new Golf and it has an excellent suspension for a car in its class, but tuning and firmness compromises clearly had to be made to accommodate the car’s diverse customer base. The addition of Tenneco’s semi-active electronic suspension control, which is available as an option in Europe, allows drivers to dial in comfort, sport and performance settings that have a significant impact on pitch, roll and heave when cornering and going over bumps. And even in sport and performance mode the ride is not harsh on rough pavement. The suspension does not just provide sharper handling, comfort is improved all around as well.

The benefits are multiplied several times over on the 640-hp, $270,000 McLaren supercar. Here Tenneco’s CVSA2/Kinetic system not only controls pitch, roll and heave, it also delivers automatic damping adjustment, eliminates the need for front and rear anti-roll bars and dampers and provides adjustable roll stiffness.

Keeping such a car below 50 mph (80 km/h) is considered a violation of the Geneva Convention in some circles, even on a very tight course. But considering the McLaren is capable of accelerating to 60 mph (97 km/h) in 2.8 seconds, it is easy to generate enough G-forces to experience the suspension working.

Most notable at first is that in “normal” mode the car is astonishingly civilized and has none of the filling-loosening harshness common with high-performance cars with extremely stiff bodies. Hitting simulated potholes at 25 mph (40 km/h) does not upset the chassis or cause the tires to lose touch with the pavement.

“Sport” mode severely limits body roll around tight corners and “track” mode pretty much eliminates it altogether at our speeds.

All in all, Tenneco makes a strong case that its electronically controlled suspensions provide benefits consumers can appreciate as much on their daily commute as on the racetrack.