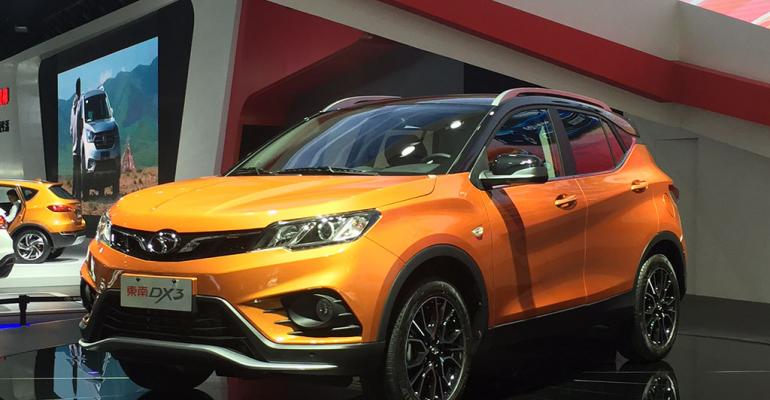 Seeking to appeal to younger Chinese customers, SEM and Pininfarina opted for a strong design inspired by German and Korean competitors and meant to express power&nbsp;and momentum.

GUANGZHOU, China – Looking to extend the appeal of the DX7 SUV to a wider audience, Chinese automaker South East Motors (SEM) and Italian design and engineering studio Pininfarina follow up with the DX3 compact SUV.

Unveiled at the recent Guangzhou auto show, the DX3 is the latest product of a partnership formed in 2012 to develop an entire family of SEM vehicles for China over the next five years.

The DX3 is smaller than the Pininfarina-designed DX7 first seen at the 2015 Shanghai auto show. Pininfarina says the DX7 garnered several design awards while making its mark in the Chinese SUV market by exceeding its target of 10,000 monthly orders for several months.

The DX3 has a style and look that differs significantly from its larger sibling, except for a few character lines that link the two Pininfarina designs. The difference is aimed at appealing to younger buyers but also reflects greater design freedom and stronger input from Fabio Filippini, Pininfarinaʼs design director since 2011.

After experimenting with a variety of design proposals geared toward young Chinese customers’ expectations, SEM and Pininfarina opted for a strong design inspired by German and Korean competitors and meant to express power and momentum.

The DX3’s interior also boasts visual quality. If it delivers on what the show car and its catalogue suggest, the production version’s cabin will be comfortable, modern and elegant. Features include a multifunctional steering wheel, aircraft-styled gearshift and outsized touchscreen.

“The DX3 is a new, young and fashionable, compact SUV designed for young generations with a dynamic lifestyle and thus it aims at combining a sporty look with flowing and elegant lines,” Filippini says. “Its design language shows a new level of confidence from its maker” and will carry over to future generations of the SUV, he says.

The DX3’s launch at the Guangzhou show is accompanied by the introduction of the Pininfarina Automotive Engineering Shanghai (PAES) team, a satellite design organization established in 2010 for the Asian region. A multicultural team of 20 designers is giving the Chinese studio a strong, dynamic character and a global vision tailored to an increasingly demanding market.

Pininfarina’s first design and engineering project for a Chinese automaker was launched in 1996. Under CEO Silvion Angori’s leadership the design studio has developed commercially successful partnerships with manufacturers including Hafei, Chery, Changfeng, Brilliance, BAIC and JAC.

SEM produces cars, buses and vans under its own brands. It also operates a joint venture with Mitsubishi and a van partnership with Daimler.