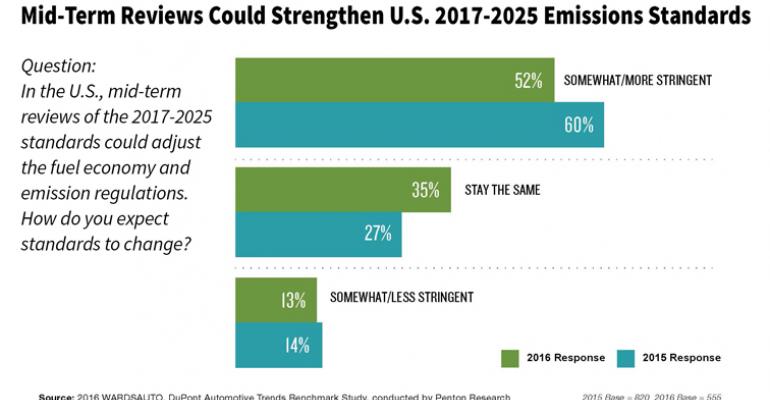 <p><strong>Despite some speculation EPA may relax upcoming CAFE rules, those working on future vehicles are planning on regulations staying the course or becoming stricter.</strong></p>
Industry News

Survey: CAFE Rules Likely to Get Tougher, Not Easier

In the latest WardsAuto survey, 87% of auto engineers and designers say the 54.5-mpg CAFE goal for 2025 will stay the same or become even more stringent.

Gas is cheap and consumers are buying trucks and CUVs in record numbers at the expense of more fuel-efficient cars, but most industry insiders do not believe these realities are enough to persuade U.S. government regulators to dial back future CAFE rules aimed at hitting 54.5 mpg (4.3 L/100 km) by 2025.

The EPA’s midterm review of fuel-economy rules for the ’22 through ’25 model years officially started last month, and the agency will deliver findings in April 2018 after thorough study and public hearings.

Even though automakers are making great strides in fuel efficiency, flagging interest in passenger cars and hybrid-electric vehicles likely will result in the first year-to-year index decline in 2016.

These factors have led to speculation the EPA might be willing to ease up on some goals, but members of the automotive engineering and design community surveyed by WardsAuto have predicted by a wide margin for five of the past six years that future CAFE rules either will stay the same or be made even stricter than the current framework dictates.

The annual survey is sponsored by DuPont Automotive and was conducted by Penton Research in June and July.

An overwhelming 90% of respondents say low fuel prices and poor sales of small cars and hybrids are hurting programs aimed at meeting CAFE targets, but 87% still say the rules will become tougher or remain unchanged. Only 13% believe the rules will be eased.

The results varied slightly from last year, with the number of those believing the rules would become much more stringent dropping about eight percentage points.

However, expectations that officials won’t relent on fuel-efficiency rules are not fixated on government inflexibility. Comments from respondents over the past several years suggest a combination of factors that include confidence in technologies being implemented faster than anticipated when the rules were set in 2012, such as 9- and 10-speed transmissions, improved aerodynamics and advanced combustion and battery technologies.

Plus, by now everyone in the industry knows 54.5 mpg is only a theoretical bogey. After special credits and allowances, the adjusted real-world target is expected to be about 40 mpg (5.9 L/100 km).

Last year at the CAR Management Briefing Seminars, Christopher Grundler, director-Office of Transportation and Air Quality at the EPA, said it was a myth CAFE regulations ignore consumer choice and are intended to force everyone into small cars.

He said the Ford F-150 fullsize pickup, equipped with a 2.7L turbocharged V-6 and 2-wheel drive meets proposed CAFE rules through 2024 without any modifications.

Whatever the case, those responsible for creating tomorrow’s cars and trucks are focusing on where they still can get the most bang for the buck: taking weight out of vehicles through various means –  including extensive use of lighter-weight materials – and making engines and powertrains more efficient.

“It’s no surprise to learn that lightweighting and use of lightweight structural materials continue to top the list of strategies the industry remains focused on,” says Brian Fish, NA automotive marketing manager-DuPont Performance Materials.

“Lightweighting can be applied to virtually every component and part, and we continue to work with the industry to look for opportunities to reduce weight across systems.”

Among survey respondents, the most popular materials being used to meet CAFE rules are aluminum (25%), and multi-material solutions (21%). The next top choices are advanced high-strength steel (17%), while advanced composites and engineering plastics tied at 11% each.

The primary targets for lightweighting are engines and transmissions (27%), chassis systems (17%) and the body-in-white (14%). Body-in-white is an engineering term for vehicle body shells not including doors and closure panels.

Despite skyrocketing use of lightweight materials and structures in new vehicles, the survey shows declining confidence today’s materials can meet the challenges facing ’22 models and beyond. And given new-product development lead times of about four years, these are the products many respondents are working on now.

The largest plurality of respondents (51%) were only “moderately confident” today’s materials portfolio could help automakers meet 2025 standards, and 28% were only minimally confident or not at all confident.

Meanwhile, 61% say use of recycled materials has stayed about the same at their company compared with last year, while 38% say it has increased either somewhat or significantly.

Use of bio-based materials has remained about the same (80%).

Respondents do see electrification increasing in vehicles, but the role it will play in fuel-economy and emissions regulations strategies remains unclear.

These answers may reflect the poor sales and sliding residual values hybrids and EVs are seeing in today’s marketplace; 73% of respondents say electrification’s role still is evolving, while only 24% say it has found its niche.

As the midterm review enters the public-comment phase, respondents say the top three topics that should be discussed are cost vs. consumer benefit of HEV/EV technologies; changing the testing methodology for calculating fuel efficiency; and how to help consumers understand fuel economy and environmental impact.

Penton Research emailed invitations on June 27 to 27,104 WardsAuto subscribers to participate in the online survey. By July 11, 604 completed surveys were received for an effective response rate of 2.2%.