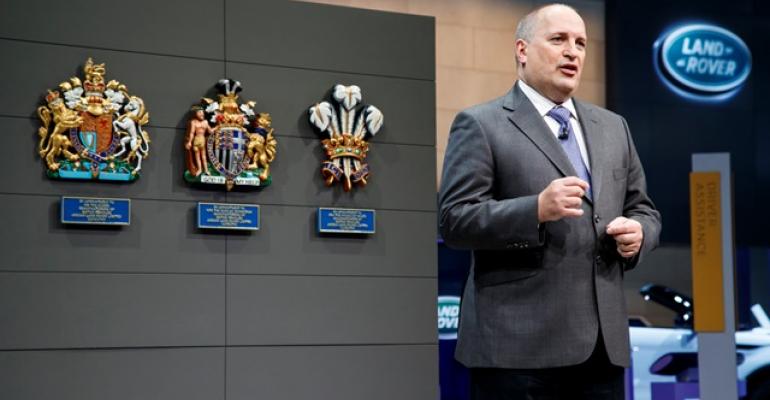 But like other foreign automakers selling in the U.S., JLR faces some potential headwinds that could be especially acute for its business.

ST. GEORGE, UT – Jaguar Land Rover North America President and CEO Joachim Eberhardt wants to see his quirky British brands enjoy more growth in the U.S. after skyrocketing sales for the luxury duo in recent years, but at the same time resists urges to populate every city block with one of its sleek sports cars or go-anywhere SUVs.

“Clearly we have to continue to grow,” Eberhardt tells WardsAuto aboard a charter jet whisking journalists between Los Angeles and rugged southwest Utah to test Land Rover’s latest offering, the luxurious and versatile Discovery 3-row SUV.

More growth is necessary because Indian multi-national manufacturer Tata Motors, which rescued JLR from Ford in 2008 as the Dearborn automaker jettisoned its luxury stable to stave off bankruptcy, has invested more than £3.0 billion ($3.6 billion) in the brands over the past three years to bolster their technology kit and launch eight new models.

Tata must begin realizing a return on that investment, which will come only when more JLR cars and trucks roll out of assembly plants in the U.K. and into the garages of more Americans.

“In order to fund (Tata’s) investment we have to continue to grow, but we are not looking to grow at the pace we have been,” says Eberhardt, who joined JLR in 2013 after 25 years in executive and advisory roles at the former Chrysler and DaimlerChrysler, as well as Mercedes-Benz and Boston Consulting.

JLR’s expansion in the past three years has been breakneck, beginning in 2013 with the Range Rover Evoq small CUV. The little truck was bit of a gamble for Land Rover, historically a seller of larger SUVs with more off-road prowess than street cred. Initial volume predictions called for 40,000 units globally in a good year and the Evoq smashed those expectations at 120,000 annually.

The Discovery Sport came last year into another red-hot segment, and the larger Discovery arrives at dealers in the coming weeks as a pair of products with an emphasis on versatility and focus on attracting a broader audience to the Land Rover brand. A new Defender is due soon, too, which will occupy a third channel emphasizing durability and capability.

Jaguar’s climb back to relevancy arguably has been steeper than Land Rover’s. For years it languished with two, or at times three, rather overpriced products in its stable. It was in desperate need of new platforms and powertrains and a CUV entry. In 2013 the F-Type was the first salvo of its renaissance, a 2-seater billed as the reincarnation of the legendary E-Type.

The XE then filled a void in the important compact-sports-sedan segment, and the F-Pace performance-minded CUV launched last year to complete a quantum leap for the brand. The i-Pace, an arresting battery-electric concept unveiled at the 2016 Los Angeles auto show is meant to challenge the Tesla Model X when it reaches the market.

“Over the last five or six years we actually tripled our volume,” Eberhardt says. “But that still does not make us a giant luxury brand. It makes a bigger luxury brand that now has scale but is still special and exclusive.

“You do not see it everywhere, and I think that is part of our appeal and something to focus on maintaining. It sets us apart from the others.”

JLR is not simply enjoying a rising tide, either, where record industry sales of 17 million units in 2016 and 2015 came after volumes bottomed out at 10.5 million in 2010. Eberhardt estimates one-third of JLR’s growth has been industry-driven, while the remainder has been Jaguar and Land Rover taking sales from rivals.

The competitor in Eberhardt would like to push harder, and he says JLR intends to do so, although it will begin picking battles on fields of its choosing.

“You cannot triple your volume every three years, but we look to continue to gradually grow with product additions such as the Velar or other white-space products for the other brands,” he says.

“The next big thing to come to Jaguar will be the i-Pace,” Eberhardt adds. “It’s a whole new segment, a purpose-built, battery-electric performance SUV and we think that will give Jaguar the next push. After that, we’ll see. There’s plenty of stuff we can do before we need to more finely carve up segments.”

But like other foreign automakers selling in the U.S., JLR faces some potential headwinds that could be especially acute for its business. For starters, the automaker sources all of is product from outside the U.S. and with President Trump and some Washington legislators talking of slapping a border tax on imports, JLR could face some serious pricing pressure.

Eberhardt says there are too many unanswered questions surrounding the proposed tax for him to comment directly, although he is in favor of the status quo.

“The auto industry, in particular, is a global industry that is very much dependent on global trade mechanisms and we would be worried if there is any development that would hinder free and fair trade,” he says. “But there are so many unknowns. Once we know what the proposal is we’ll analyze it and work with the appropriate agencies to address it.”

JLR also has made diesel a key piece of its powertrain strategy in the U.S., a sensible play at the time with competitors such as BMW, Mercedes-Benz and Audi enjoying a degree of success with the technology. Land Rover with its big SUVs especially is well-suited to the powerful towing torque and driving distances diesel affords.

But Volkswagen’s diesel-emissions-cheating scandal in 2015 may have sullied the technology’s reputation. The automaker decided to quit diesel sales in the U.S. and globally migrate away from it in favor of electrification over the next decade. Mercedes is looking closely at giving up on diesels in the U.S., too, depending on where demand settles in the coming years.

Eberhardt remains bullish on JLR diesels, which in the Range Rover and Range Rover Sport enjoy a 15% take rate for the automaker’s 3.0L turbocharged mill. The same engine appears as an option on the new Discovery. The Jaguar XE and F-Pace offer 2.0L 4-cyl. turbodiesels.

“We’ve had great success, and there will be diesels on future vehicles, as well,” he says.

Diesels help JLR meet stringent fuel-economy and carbon-dioxide emissions regulations in the U.S., although Trump also has thrown the final rule of 54.5 mpg (4.3 L/100 km) by 2025 into question by reopening a review of the laws passed under his predecessor.

Eberhardt admits that, like the proposed border tax, future efficiency rules are an unknown.

“What I do know is that customers appreciate fuel-economy improvements,” he says. “They are looking for better fuel economy and we will continue to work on delivering that by taking weight out of the cars. That’s why all of our vehicles are going to aluminum-intensive or all-aluminum structures.

“We’ll wait and see what happens on the regulatory front and work with the administration on delivering whatever we’re asked to deliver,” Eberhardt says. “But as long as you fulfill your customers’ needs and requirements, you will be successful. They will be the ones to tell us what is good enough.”