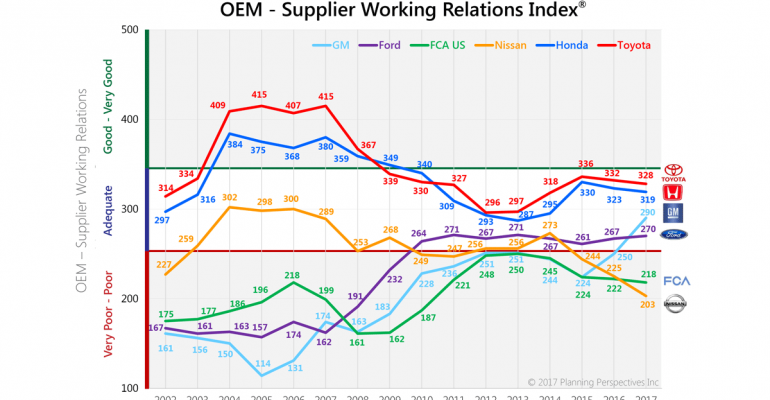 Suppliers Like What GM Serves, Not So Much at Nissan

General Motors&rsquo; vast improvement in supplier relations the past two years is no accident, says Planning Perspectives President John Henke, who gives some credit to CEO Mary Barra for setting the tone.

North American suppliers are viewing General Motors much more favorably, and it’s paying off in their willingness to share advanced technology with the automaker, data from Planning Perspectives indicates.

The consultancy’s 17th annual “North American Automotive OEM-Supplier Working Relations Index” released today shows the opposite trend for Nissan, which plunged to the bottom among the six companies rated.

The WRI, based on a survey of 652 salespersons from 108 Tier 1 suppliers doing business with the top six automakers in North America, also records a performance lull for the top two companies, Toyota and Honda, whose scores have leveled off in recent years.

Most of the credit goes to purchasing chief Steve Kiefer, who Henke says is preaching the importance of good supplier relations and has succeeded in recruiting a group of department-head disciples who firmly believe in the message and are helping execute the game plan.

“He’s (assembled) a leadership team that is absolutely in sync when it comes to developing collaborative supplier relations,” Henke says of Kiefer, a longtime executive at supplier Delphi until re-joining GM in 2013. “He’s got the right people in place – there’s no question it’s a team effort.

“And when you talk about a team effort, you can go on up to (GM CEO Mary) Barra,” Henke adds. “She’s created a collaborative environment, an environment of nice people working together.”

The effort is paying off. Planning Perspectives rates GM a 373 on its Supplier Benefit Index that measures how willing Tier 1s are to share innovation, make price concessions, invest in development and otherwise support a particular automaker. That’s nearly even with Honda and Toyota and 19 points better than GM scored a year ago, a gain Henke calls significant.

By comparison, last-place Nissan was rated at 330 on the Supplier Benefit Index, while posting poor scores across all six commodities tracked by the WRI: Powertrain, Chassis, Exterior, Interior, Electrical/Electronics and Body-in-White. Henke blames the results on Nissan’s aggressive push for price concessions in an effort to achieve a stated 10% profit-margin goal.

Ironically, GM’s targets on price cuts and quality improvements haven’t been much different than Nissan’s, the Planning Perspectives executive says, an indication it’s not what you do but how you do it.

“Nissan’s adversarial approach to reducing costs has greatly disrupted relations with its suppliers, and it is safe to say that it has cost them tens of millions of dollars in supplier contribution to profits,” he says.

In a statement released Monday, Nissan says, “These study results do not reflect our experience of the technical and commercial relationships that we have with our suppliers, who have made significant contributions to Nissan’s growth in North America. Suppliers will continue to play a key role in our shared success as we launch Nissan’s new mid-term business plan later this year.”

Sustaining its current growth pace will be tough for GM, Henke acknowledges. “This is really good news,” he says of GM’s WRI score. “(But) you’ve just created a hell of a challenge for yourself. The better you get, the harder it is to make incremental improvement, so they will be challenged.”

However, he still believes the automaker can continue to make gains and possibly even surpass Toyota and Honda, which Henke says are experiencing growing pains caused by an influx of new purchasing personnel who haven’t been fully trained and indoctrinated to the ways of supplier relations.

Toyota, in particular, has been on a hiring binge due to the relocation of its purchasing operations from Kentucky to Michigan. Fewer employees than expected have been willing to make the move.

Despite the flattening out of their scores, Toyota and Honda remain the top two companies suppliers prefer to work with by a wide margin.

Henke doesn’t consider Ford’s middle-of-the-pack performance to be poor, but says the leveling off of its WRI scores reflect the transition still under way from former top engineer Hau Thai-Tang’s reassignment to head of purchasing.

FCA’s performance mystifies Henke, who puts part of the blame for the automaker’s continued ranking near the bottom on CEO Sergio Marchionne.

“There’s incredible micromanaging there,” he says of FCA. “And I think it’s raising havoc within FCA and certainly the supply base. You never know what’s going to be done until Marchionne either indicates he’s not going to do anything or he comes in a couple weeks later…and says, ‛I don’t like that, do it this way.’”

All six automakers are expected to raise their games once they’ve had time to analyze the results.

“There is of course this friendly, competitive nature I’ve picked up among the OEMs with this study,” he says, predicting Ford will be working hard to leapfrog GM, while GM will have its sights set on Toyota and Honda. Nissan, he says, will be eager to get out of the ranking’s basement. “So I think they’ll (all) get going.”