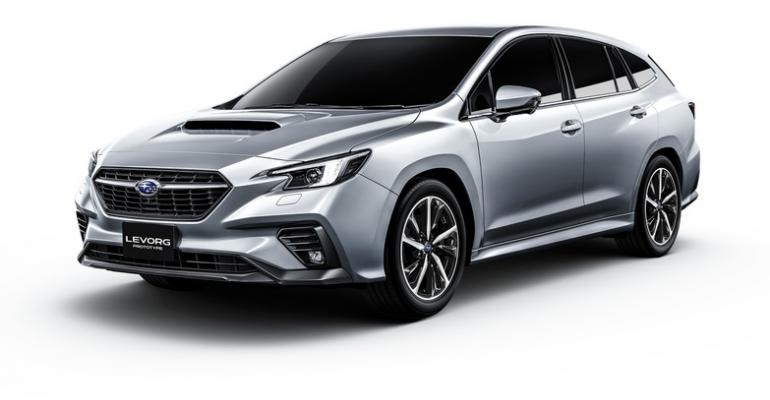 Front radars will be used on Subaru’s new Japan-market wagon, a change from its current ADAS setup.

In a country where the vehicle type still is popular, Subaru rolls out a next-generation station wagon concept at the 2019 Tokyo Motor Show.

The Levorg wagon “features various cutting-edge technologies and has been developed as a symbolic model of the new generation of Subaru,” the automaker says in a statement provided to media.

The production version of the Levorg is due on sale in Japan in second-half 2020. A first-generation Levorg has been on sale in Japan since 2014. A Subaru of America spokesman says the next-gen wagon is not scheduled to come to the U.S.

For its latest concept, Subaru designers were directed to create a bolder exterior design, and one that expresses passion and enjoyment, it says, adding the car fits with its abiding design language of “Dynamic x Solid” already seen on new generations of the Legacy midsize sedan and Outback midsize CUV.

The Levorg concept also has the same inner-frame construction of those vehicles as it too rides on the automaker’s Subaru Global Platform.

The wagon is powered by a newly developed 1.8L turbocharged and direct-injected boxer 4-cyl. Although it offers no specifications, Subaru says the mill “balances acceleration and environmental performance at a high level” and boasts ample torque.

Perhaps the biggest news is the Levorg steps up Subaru’s advanced driver-assist system technology, which likely will roll out across the brand’s portfolio and to models sold in other countries.

The Levorg has four radars, both front and rear, vs. just two in the rear in current production models. Subaru has been unique in the industry for using only cameras, not radars, to control its forward-looking ADAS features (adaptive cruise, lane keeping and centering), which it packages under the EyeSight moniker.

Part of a new EyeSight system on the Levorg is a wider-viewing angle stereo camera. In combination with the radars, it creates 360-degree sensing around the vehicle and expands the operating range of pre-collision braking to cover low-visibility turns and crossings of intersections.

The next-gen ADAS also includes high-definition mapping and the ability to precisely locate vehicle position. Both features can enable a geofenced-type of semi-autonomous highway driving, although Subaru appears to be taking a more cautious approach.

“In combination with the high-def map data, the vehicle recognizes the shape of the highway ahead, reduces speed before going into a curve and assists hands-free driving in traffic congestion,” Subaru says.

For the first time in Japan, Subaru says it will offer collisions alerts, with distress messages relayed to police and fire departments via an operator should a Levorg owner find himself or herself in an emergency. The vehicle also will have an emergency call button if the driver wishes to summon help.