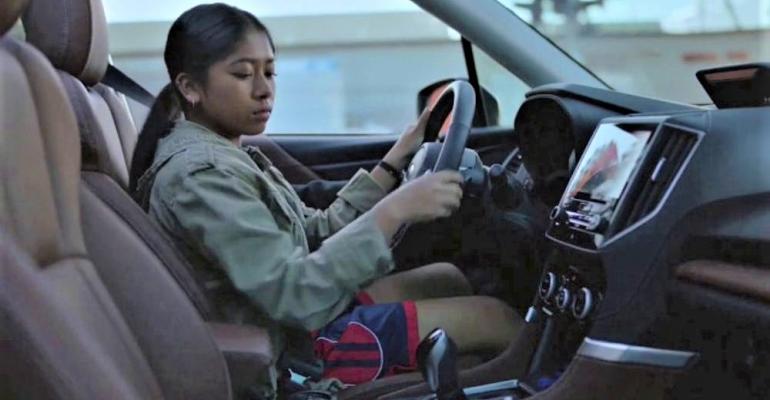 The No.1 ad for the week of Feb. 3 touts the safety of the Subaru Forester, thanks to the DriverFocus feature that alerts drivers when their eyes aren’t on the road.

Subaru takes first place in iSpot.tv’s latest ranking of the most-viewed automotive commercials  – the ads that have generated the highest number of impressions across national broadcast and cable TV airings.

The No.1 ad for the week of Feb. 3 touts the safety of the Subaru Forester, thanks to the DriverFocus feature that alerts drivers when their eyes aren’t on the road.

In its second-place spot (a longer version of which debuted during Super Bowl LIV), Hyundai taps Boston natives John Krasinski, Rachel Dratch and Chris Evans to highlight the “smaht pahk” feature of the ’20 Sonata, which allows the model to park – and unpark – itself.

This spot has the best iSpot Attention Index (153) in the ranking, getting 53% fewer interruptions than the average auto ad (interruptions include changing the channel, pulling up the guide, fast-forwarding or turning off the TV).

At No.3 is a commercial for the ’20 Lexus NX that shows off the luxury CUV’s optional Alexa app integration. The ad says Lexus is offering special leasing on the NX 300 to qualified customers. The brand also owns the fifth-place ad, which spotlights the RX series and lets viewers know that a special deal is available on the ’20 RX 350.

Volkswagen’s fourth-place ad poses a question about what motorcade drivers drive when they’re off the clock. For the woman featured in this spot, the answer is a ’20 Passat.

Attention Index - Represents the Attention of a specific creative or program placement vs. the average in its respective industry. The average is represented by a score of 100, and the total index range is from 0 through 200. For example, an attention index of 125 means that there are 25% fewer interrupted ad plays compared to the average.