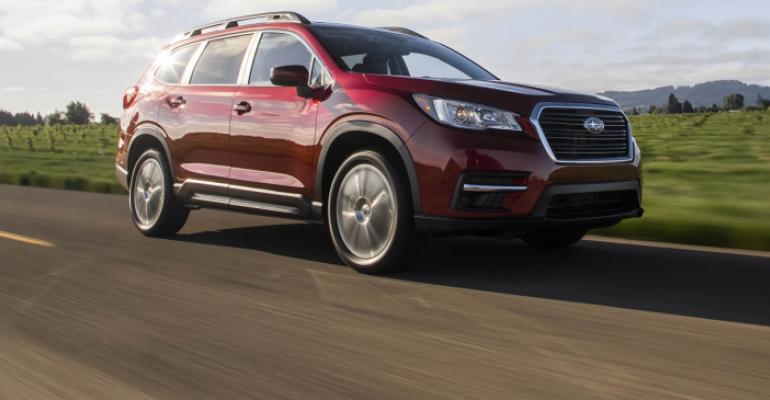 But Subaru’s U.S. leadership isn’t getting cocky about entering the upper echelon of brands. Despite thin days’ supply for some of its most in-demand models, it won’t be cranking up output at its plants to have another big volume gain in 2019.

“Our biggest issue is we don’t have enough supply,” Tom Doll, president and CEO-Subaru of America, tells Wards in an interview. “But we want to make sure we can produce the cars with quality, and we want to make sure we can bring our suppliers along with us, so we’re not at peak production at this point,” he says, adding: “We do want to try and slow it down a little bit.”

Days’ supply of the new Ascent 3-row CUV stood at 20 days last week, Doll says, the same as the redesigned Forester compact CUV. Inventory of the Crosstrek small CUV is even more scant, at 15 days’ supply.

“We’ve got some (good) supplies of Legacy and Impreza, but everything else is just really (thin),” he says.

Output of the Impreza compact car and Legacy midsize sedan at Lafayette dropped sharply, down 26.4%, or roughly 42,000 fewer units assembled than in 2017. The plant’s light-truck production rose 18.5% with the addition of the new Ascent offsetting a slight decline (-4.8%) in Outback midsize CUV builds.

To cover its cost increases and generate enough cash flow to invest in new products and technologies, Doll says Subaru has to grow U.S. volume 3%-5% annually. However, this coming year will be on the low end of that, 3%, due to the automaker’s desire to maintain vehicle quality and not overtax its supply base.

A 3% increase would put Subaru at the 700,000-mark and buck an expected industry trend of declining volume in 2019.

The Ascent drove much of Subaru’s growth in 2018 and is expected to continue to be a strong seller this year. Doll is excited to get 12 months out of the CUV; it didn’t go on sale until late August 2018.

Doll says the 3-row CUV is bringing a new buyer to Subaru, with the brand’s digital cross-shopping data showing it wasn’t a culprit in the Outback’s 5.3% sales decline in 2018.

“Outback was great through August and then it started to get a little bit further south than we wanted,” he says, attributing the midsize CUV’s decline to the redesigned Forester launched late last year luring buyers away, as well as buyers waiting for the next-generation Outback coming this year.

Subaru also gained new buyers in 2018 via its small Crosstrek CUV, Doll says, noting its style, as well as its utility, are its big selling points.

“People buy that car for the style and the message that it sends to them – it’s something we’ve got to keep in the back of our minds as we continue to develop products going forward. You can’t underestimate the importance of styling.”

Subaru is retailing a plug-in hybrid version of the Crosstrek to meet the zero-emission-vehicle mandate in California and the other states following California Air Resources Board emissions rules, but Doll expects that variant to make up a scant portion (about 300) of Crosstrek’s monthly sales in 2019.

More electrified Subarus are due, and Doll believes Subaru can make a go of EVs in its “own unique Subaru way,” even though every other automaker save for Tesla has struggled to sell them in high volumes.

“Our job is to try and create a market for it,” he says, adding what is holding back widespread adoption of EVs, particularly pure battery electric vehicles, is lack of charging stations.

“I think people are agnostic in terms of the engine,” says Doll, arguing that consumers don’t really care if their vehicle has an electric motor fed by a battery or an internal combustion engine.

While charging times are decreasing slightly from the roughly one-hour length it takes to fill a larger lithium-ion battery pack to 80% full, some automakers, charging networks and equipment suppliers are targeting faster times. For instance, General Motors CEO Mary Barra announced last year the automaker wanted to create a more robust charging infrastructure, with charge times of less than 10 minutes.

Meanwhile, Doll believes the car segment will “start to level out” in 2019, but says young people in particular are “migrating away from the sedan…so we’ll have to figure something out.” However, the exit of some brands (i.e. Ford, Chevy) from compact and midsize car groups will provide an opportunity for Subaru to gain market share, he believes.

The automaker won’t be pushing cars onto fleets, Doll vows. “We worked too hard to get to where we are so we’re not going to let it go south simply by putting excess production into fleet vehicles.”

Doll says Subaru learned its lesson years ago, when it sold cars unwanted at retail to fleets, and brand residual values got “killed.” Subaru sold a relatively small amount of vehicles, “17,000 or 18,000,” to daily-rental firms last year, but a spokesman notes they were premium vehicles, such as pricey Outbacks for rent around ski resorts in Colorado and Utah.

On the hot topic of autonomy, Subaru is maybe not the loudest, but Doll says it is working on advanced autonomous vehicle technology. “We’re probably a little bit more judicious in how we’re rolling it out. We’re not looking at it as a way to sell cars today. We want to make sure when we do bring it out, the technology’s going to work and it’s going to be effective 100% of the time.”

In a global business plan announced last year, Subaru says it wants to debut a new, high-volume hybrid in the early 2020s and that it wants Level 4 autonomous technology in its vehicles by 2024.