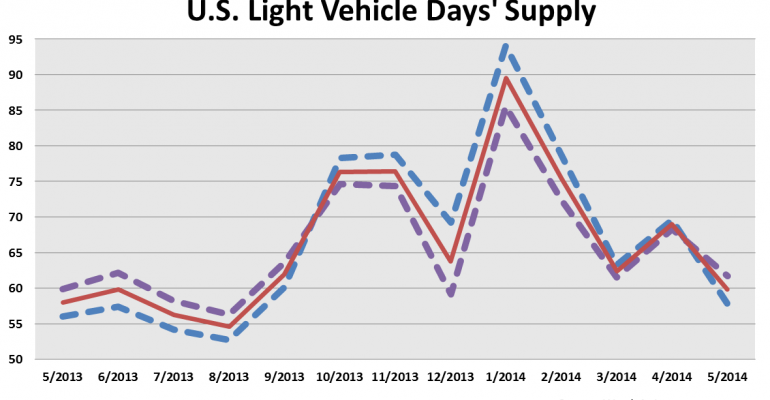 Strong May Sales Cause Healthy Paring to U.S. Dealer Inventory

Another reason to get car stocks under control at this time of year is the sales mix, which will start to favor CUVs, SUVs, large pickups and luxury vehicles.

Unexpectedly strong light-vehicle deliveries in May took a good chunk out of U.S. dealer inventory heading into June, and assuming sales volume does not drop too much this month from the prior period, automakers should be in good stead with a balanced level of stocks for Q3.

Even though there likely will be some payback from May’s surge, sales in June are poised for a fourth straight month above a 16 million-units seasonally adjusted annual rate.

The month-to-month inventory decline in May is normal, but was exacerbated this year because the sales period was cut off on June 2, giving the month extra selling days and creating a bigger drain on vehicle stocks. Thus, June sales volumes will be smaller because of fewer selling days and inventory is likely to increase from May more than usual. But sales of a 16 million SAAR or better in June should keep inventory largely in line with demand, which is expected to creep upward the rest of the year.

Stock volumes in the Middle Car group were slightly bloated in April, but the total was culled a fair amount in May, down 6.6% from prior-month. But with the segment’s inventory still 12.1% above year-ago, expect actions at both the plant level and retail side in June to further cut dealer stocks.

Based on daily selling rates, the segment finally burst through with a 2.2% year-over-year gain in May, probably with the help of some additional incentive activity and fleet volume, after recording an 8% decline during the first four months of 2014.

Additionally, rather than going too far into the incentive well, Ford and General Motors used temporary plant shutdowns to cut midsize-car inventory.

Among other sales leaders in the segment, the Toyota Camry’s results, after running flat this year through April, spiked upward by 21.8% in May. The Honda Accord, with sales down 7% during the first four months of 2014, jumped to a 14.9% increase in May. Inventory for Camry dropped 14.3% from April and Accord declined by 5.6%.

Major players in the midsize-car segment, including the aforementioned, will do well to keep inventory in line. Chrysler is still ramping up availability of the new 200 sedan, and Hyundai and Subaru are readying the release of redesigned versions of the Sonata and Legacy, respectively, in the third quarter. Increased demand for all three new cars will make the segment even more competitive, especially for older models.

Small cars followed a similar pattern. After recording a 1.9% year-over-year decline in 2014 through April, the segment group’s sales spiked above year-ago by 8.3% in May. Accordingly, inventory of small cars, although still 2.6% above year-ago, declined 6.9% from April.

The May uptick in small-car sales also could have been due to some increased incentives or fleet deliveries. In the case of Mazda3, dealers could have been clearing ’13 models to prepare for the redesigned, and first-time North American-built, versions now being shipped.

Although probably not to a significant extent, rising gasoline prices, which posted six straight month-to-month increases through May, could have encouraged some of the shift to smaller cars.

Another reason to get small and midsize car stocks under control, especially at this time of year, is the sales mix, which historically favors CUVs, SUVs, large pickups and luxury vehicles between June and October