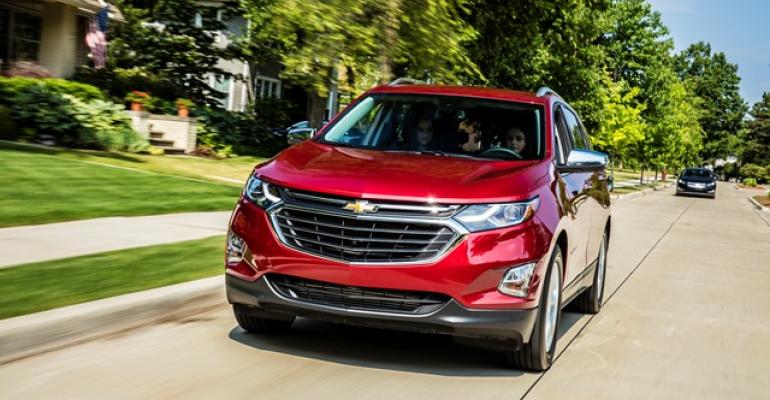 General Motors will lose an estimated 850 units of production daily due to a strike at the automaker’s Ingersoll, ON, Canada, assembly plant, which builds the popular Chevrolet Equinox crossover.

Inventories of the newly redesigned Equinox 5-passenger CUV closed August with a 61-days’ supply, compared with 57 year-ago, according to WardsAuto data. The current stock of Equinox models would be healthy for the current demand environment in the U.S. and likely enough to keep dealers selling a week or so before feeling a pinch in supply.

Equinox sales so far this year are up 16.9% to 28,245 from 23,524 in the same period last year amid a seemingly insatiable appetite from U.S. buyers craving the car-like ride and SUV-like styling and cargo room CUVs provide.

Before GM ended production of the GMC Terrain at Ingersoll in August and moved output of the redesigned model to Mexico, the assembly plant 130 miles (209 km) northeast of Detroit would run three shifts and often with overtime. GM also for a time shuttled Equinox bodies from Ingersoll to its nearby Oshawa, ON, Canada, assembly plant for finish work. The plant continues to operate at capacity with three crews, GM says.

Equinox production in North America is expected to rise 50.5% this year, according to a WardsAuto forecast.

The Unifor union blames the move of the Terrain to San Luis Potosi, Mexico, from Ingersoll on NAFTA, which has created more favorable production costs for GM. Ingersoll lost 600 jobs with the production shift, Unifor says, and now builds only a single product with the Equinox.

The Equinox also is built in Mexico and the Ingersoll walkout occurred Sunday at 10:59 p.m. after talks between Unifor and GM over future product commitments broke down. The plant’s previous contract, which is negotiated with Unifor separately from the negotiations with the UAW in the U.S., expired Sunday.

“Every member understands the importance of reaching a deal that secures production, and what that means to our families and the community,” says Mike Van Boekel, Local 88 Chair at Ingersoll, also known as CAMI form its early days in the 1980s as a joint venture between GM and Suzuki. It now is wholly owned by GM with 2,800 employees.

“The membership showed incredibly strong support for their bargaining committee throughout these negotiations,” Boekel says in a statement.

Local 88 members at CAMI voted 99.8% on Aug. 27 to give their bargaining committee a strike mandate, according to Unifor.

GM says in a statement the two sides made progress on several issues over the past week and it wants to return to the bargaining table.

“(GM) is disappointed that we were not able to complete a new agreement,” the automaker’s Canadian operation says. “We encourage Unifor to resume negotiations and to continue working together to secure a competitive agreement.”