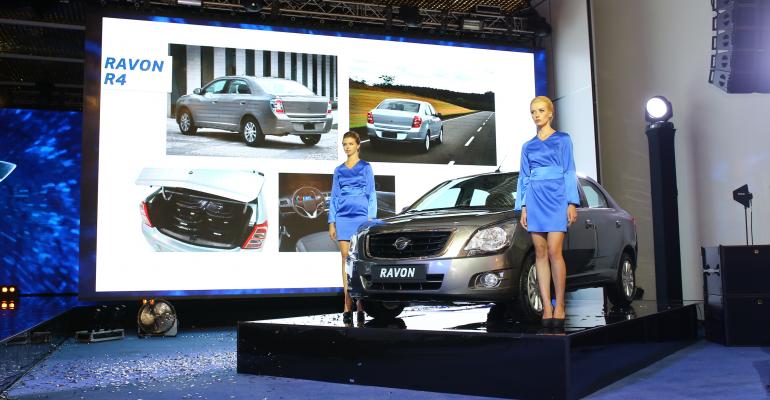 Some Chevrolets to Make Russian Comeback Under Ravon Brand

The new Ravon brand plans five models for now, including the R3, an updated version of the previous-generation Chevrolet Aveo sedan.

VIENNA – GM Uzbekistan, the joint venture owned 25% by General Motors and 75% by the Uzbek state auto industry company UzAvtosanoat, will sell its cars in Russia under the newly created Ravon brand.

Until now Uzbek-made cars were exported to Russia as Chevrolets or Daewoos. The new Ravon brand, unveiled in Moscow this week, is considered an acronym for Reliable Active Vehicle On-road. The word also means “easy way or clean way” in the Uzbek language.

Ravon reveals five models at the Thursday night event. Available initially will be the Ravon Matiz and Gentra cars, both previously sold as Daewoos. While the Matiz is a slightly modernized version of Daewoo’s legendary minicar, the Gentra sedan is based on the old Daewoo/Chevrolet Lacetti.

Ravon’s third model will be the new Nexia R3, an updated version of the previous-generation Chevrolet Aveo sedan. GM Uzbekistan is preparing for volume production of the car, which will replace the aging Daewoo Nexia in the Russian market. It will be launched next year.

Both Uzbek-made models were offered at Chevrolet dealerships earlier this year when GM announced it would cease production in Russia and stop selling Opel cars, as well as most of its Chevrolet offerings in March. With the help of the Ravon brand, GM has found a way to continue sales of these two models in Russia in 2016.

“The long-term plans for the development of the brand include the premiere of several new cars in the C-class and compact SUV segments,” Ravon importer UzAvto says in a statement.

In the past, Daewoo cars were sold in Russia through an independent retail network that was not connected to GM’s Chevrolet, Opel and Cadillac dealerships.

With the switch to a new brand and addition of new models, GM and UzAvtosanoat expect to increase market share to at least 5% in 2020.

“The new brand combines the best of the Daewoo brand and the vast experience we have acquired over 20 years of work in the Russian market,” Tokhirzhon Zhalilov, deputy chairman of UzAvtosanoat and general director of GM Uzbekistan, says in a prepared statement. “The cars will be sold through the existing dealer network with the addition of new (dealers) as we expand our portfolio.

“We are confident that in the near future we will be able to take a greater share in the segment of affordable cars in Russia,” he adds. “The Ravon brand, like (its) predecessor Daewoo, came to Russia with serious intentions for a long time.”

GM will continue to import Cadillac vehicles as well as the U.S.-built Chevrolet Corvette, Camaro and Tahoe in Russia for 2016. Some of the vehicles will be assembled from SKD kits by contract assembler Unison in Obchak near Minsk, Belarus.

GM-AvtoVAZ, the 50-50 JV between General Motors and Lada manufacturer AvtoVAZ, will continue production and sales of the Chevrolet Niva small SUV. However, the future of the next-generation Niva, unveiled as a concept at the Moscow auto show in August 2014, remains unclear.