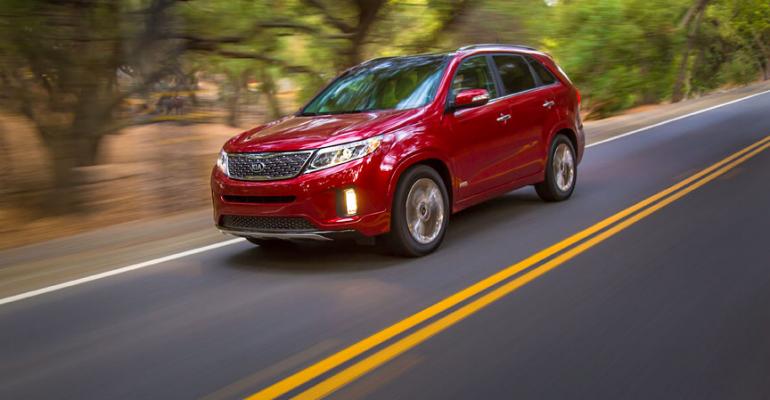 The Korean auto maker considers 2013 a transition year in the U.S. for selling down older models and launching new versions.

However, the CUV, one of the brand's best-sellers in the U.S. with an annual volume of more than 100,000 units, trailed year-ago sales in February and April. April's decline was the biggest, down 11.0%, on a daily-selling rate basis.

The problem is that at the same time Kia has been selling down the older-model Sorento, the product pipeline of new '14 models arriving at dealers has "been a little bit slower than we anticipated," Michael Sprague, executive vice president-marketing for Kia Motors America, tells WardsAuto in an interview during a media event here.

The situation is the same for the next-generation Forte sedan, he says, which also was advertised during the Super Bowl but went on sale in late March. The model’s sales, which include the prior-generation sedan, coupe and hatchback, have been sharply down this year, plummeting 29.1% in April.

"Those vehicles have to come from Korea, so you've got the transportation issue as well," Sprague says.

The loss in Forte and Sorento volume, combined with declines in several other models, left Kia's deliveries flat or below like-2012 in five of the past six months.

Sprague and other top U.S. Kia executives here consider the recent sales decline a short-term trend. They are confident new product already in market, and some models due later in the year, will drive the brand back into positive territory.

In addition to the new Sorento and Forte 4-door, Kia currently is launching the all-new Cadenza front-wheel-drive, near-luxury sedan, a cousin of the Hyundai Azera, and will debut 2- and 5-door versions of the Forte this summer.

The next-generation Soul compact car also is due this summer, followed by a refreshed Optima midsize sedan in the fall.

Kia is calling for "modest growth" in the U.S. for 2013, which it classifies as a transition year between old and new models. The auto maker earlier predicted a 577,500 annual sales year, based on a 15 million-unit light-vehicle market and maintaining its 2012 market share of 3.9%. That would amount to 20,000 more units than last year’s total.

Sprague says Kia wants to take the time to develop and improve the brand experience in the interim year, while Tom Loveless, vice president-sales, says incentives will be reined in.

Even with "crazy competition out there, we're not going to do stupid stuff to chase a rabbit for a short-term headline," Loveless tells media here. "We're working a plan,” he says. It's not about the next 30, 60, 90 days; it's about the next three years."