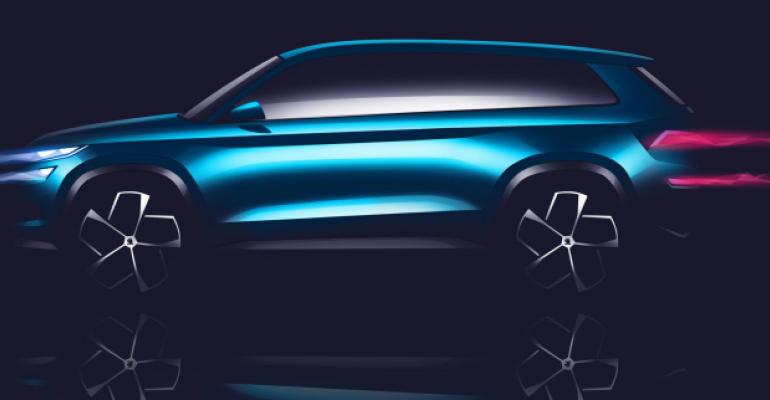 The Vision S fits closely within the midsize footprint of the Q5 from sister brand Audi, but is a bit longer, wider and taller.

Volkswagen’s subsidiary Skoda returns to the Geneva auto show next month with an SUV concept called Vision S, although it may be closer to production than the Czech automaker can say.

A quirk in the rules at Geneva say cars not yet on sale must be presented as show models, but Skoda’s description and specifications of the Vision S suggest it is close to Job 1.

For starters, the Vision S fits closely within the midsize footprint of the Q5 from sister brand Audi, but is a bit longer, wider and taller. Unlike the luxurious Audi, the Skoda version banks on passenger capacity with six seats across three rows, taking full advantage of VW’s emerging MQB platform.

Interestingly, the renderings released by Skoda ahead of Geneva do not show the doors, so it unclear until its premiere exactly how successfully designers may have created easy ingress and egress to the third row.

The Vision S also could be a good candidate to show off an engine from Volkswagen’s new line of 4-cyl. gasoline and diesel units, although specifications on those are due a few weeks later in Vienna.

Skoda will arrive in Geneva off a banner 2015, when global sales of the value-oriented brand grew 1.8% to 1.06 million units. It marked the second time in the automaker’s history that annual sales exceeded 1 million. It last eclipsed that level in 2014.