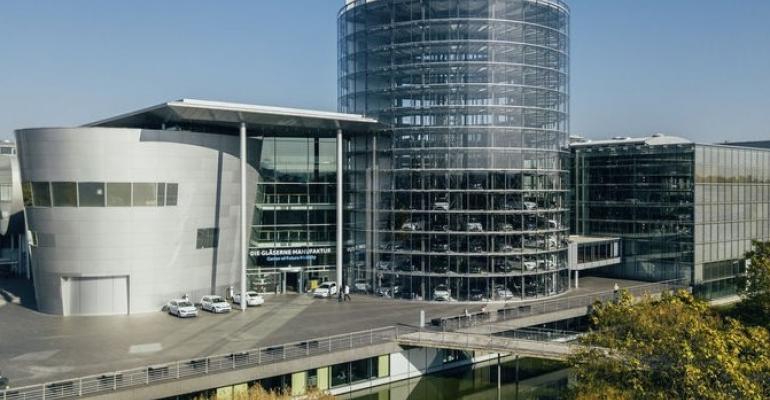 Following VW’s announcement of European production at the Zwickau plant, it also will assemble the ID.3 at the nearby Gläserne Manufaktur facility in Dresden.

Volkswagen is going all-in in its European gamble that the new ID. family of electric cars will be a winner: Production is being extended to another German plant.

Following its announcement of European production at the Zwickau plant, it also will assemble the ID.3 at the nearby Glaserne Manufaktur facility in Dresden.

The first vehicles from VW’s MEB platform family are scheduled to leave the assembly line in Dresden in autumn 2020. The automaker says the plant could assemble more models from the ID. family later.

VW says it has plans to establish or expand new areas of business in the fields of vehicle collection, in-sourcing and vehicle testing in the border tripoint of Poland, the Czech Republic and Germany. In this, Dresden’s role as a vehicle-collection point is to be expanded with a specific focus on electric vehicles.

Series production of the IR.3 began two weeks ago in Zwickau. Some 1,300 ID.3s are being delivered to German customers this year.

The Volkswagen Group plans to launch up to 75 all-electric models and some 60 hybrid vehicles in the marketplace through 2029 and aims to sell some 26 million electrified vehicles by then while spending some €33 billion ($36.5 billion) on e-mobility alone.

Group board member Gunnar Kilian says: “The decision to bring the ID. family to Dresden lays a solid foundation for the future of this location in (the State of) Saxony. Employment levels remain stable. And at the same time, we are stepping up the pace for e-mobility. We need the Manufaktur as an important showcase to take our customers on board for e-mobility and digitalization.”