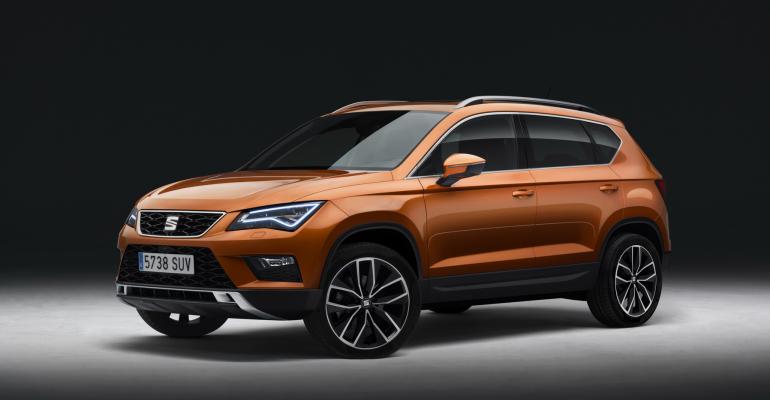 The Spanish automaker&rsquo;s first CUV will not be assembled in Spain but at sister brand&rsquo;s Skoda&rsquo;s plant in Czech Republic. It is the first of three crossover models to come for SEAT.

MADRID – Just weeks before its public debut at the Geneva auto show SEAT gives media a peek at its first-ever CUV.

Called the Ateca, the new model takes its name from a small village in Zaragoza province, some 137 miles (220 km) northeast of Madrid.

Luca de Meo, named CEO three months ago, presents the Ateca to the media at the Barcelona airport, underlining the importance the model to the brand’s future. Sales are expected to be all additive for the brand because the Ateca doesn’t replace an existing vehicle the lineup, but it’s more likely the new CUV will take some demand from other models in SEAT’s showrooms.

More importantly, the Ateca occupies the hottest segment in Europe, which reached a 22.5% share in 2015. In Spain, CUVs account for nearly 20% of the market, and that penetration is expected to increase to 25% by 2020.

De Meo says the new Ateca will become the third pillar in SEAT’s lineup, together with the existing Leon and Ibiza models. It will be assembled at the Skoda plant in Kvasiny, Czech Republic.

Ateca is the first of the three CUVs SEAT plans to launch before 2020. Next up is a model smaller than the Ateca that will be based on a platform under development for the next-generation Ibiza. It is expected to reach showrooms in about 18 months and will be assembled at SEAT’s Martorell plant.

The third CUV will be positioned above the Ateca and will derive from the 20V20 concept SEAT exhibited at Geneva last year. Still unknown is where the model will be built.

The Ateca, which uses parent Volkswagen Group’s MQB platform (VW Golf, Audi A3), will be offered with 2- and 4-wheel drive.

Technology includes LED headlamps, smart cruise control with traffic-jam assist and an emergency-assist system that will attempt to revive an unconscious driver with sounds and signals, then bring the car to the stop if he is unresponsive. Blindspot and cross-traffic alert, plus Apple and Android connectivity also will be available.