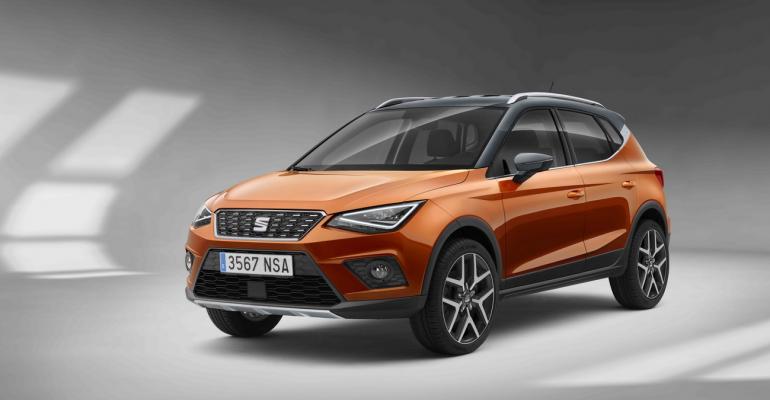 Going on sale in Spain in November, the Arona is based on the recently launched fifth-generation Ibiza. Both vehicles use SEAT parent Volkswagen&rsquo;s MQB modular architecture.

MADRID – Spanish automaker SEAT unveils its B-segment Arona compact CUV to be exhibited at the Frankfurt auto show in September.

Going on sale in Spain in November, the Arona is based on the recently launched fifth-generation Ibiza. Both vehicles, as well as the upcoming sixth-generation Volkswagen Polo and its future CUV version, use or will use SEAT parent VW’s MQB modular architecture.

A 90-hp compressed-natural-gas version of the Arona will go on sale in mid-2018. In 2019, an electric version based on VW’s MEV platform that will offer 248-310 miles (400-500 km) of range is scheduled. Both the CNG and EV versions are needed to meet the 95 g/km carbon-dioxide-emissions standard the European Commission will set in 2021.

This greater height has allowed raising the driver’s position and makes it easier to enter and exit the vehicle. Cargo capacity is 14.1 cu.-ft. (400 L).

The Arona is the second of SEAT’s weapons – after the Ateca, unveiled in February 2016 – to assault the SUV/CUV market in Europe, where demand for the vehicles is estimated at 2.3 million units by 2020. Analysts note SEAT faces 17 competitors, although company officials identify the Renault Captur as their main target.

Next year, SEAT will launch a 5- to 7-passenger SUV that will be assembled in Germany. The Ateca is assembled by fellow VW affiliate Skoda in Kvasiny, Czech Republic.

“The success of this (Ateca) model has forced us to modify the production scheduled for the Arona,” de Meo says, explaining the Arona and Ibiza were to be built on the same line at a 30:70 rate but now are assembled at a 40:60 rate. “It was necessary to modify the supply pace from our suppliers,” he says.

SEAT global sales increased 14% to 201,300 in the first five months of this year compared with like-2016, the automaker says.