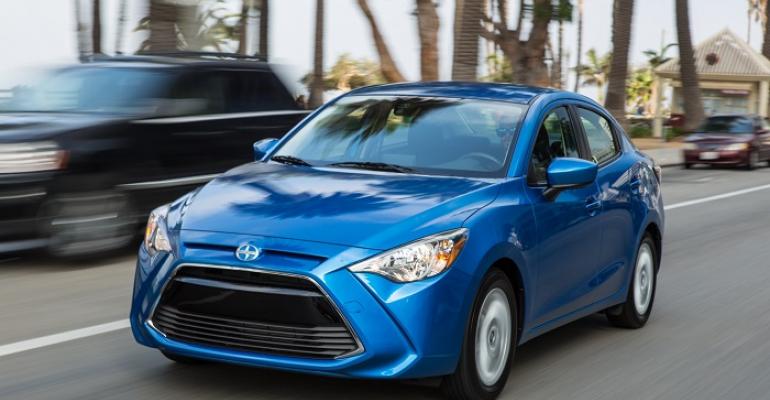 But one result is more surprising. The iA is attracting more female than male buyers, an unexpected phenomenon, but one newly installed Scion Vice President Andrew Gilleland says is “not bad at all.

“We need to continue to realize females are making a lot of the purchase decisions, have a lot of purchasing power, and I think automakers that don’t recognize that are going to get punished pretty bad,” he says.

The brand mostly attracts men at the moment, with a 55%-45% male/female ratio, says a Scion spokeswoman.

Many auto brands traditionally market, if not design and engineer, a vehicle to a male audience, as research has shown men will not buy what they perceive to be a female-focused vehicle, but women will purchase a “man’s car.”

Upon the release of the current-generation tC in 2010, Scion acknowledged the vehicle was redesigned with a male buyer in mind, after the first-generation tC was a hit with females.

Anecdotally, Gilleland says that repositioning didn’t hurt the tC’s appeal to women, as he helped a friend purchase one of the sport coupes for his daughter.

“She put some wheels on it and she loves it,” he says. “She looked at the other cars we had and said, ‘I want that.’”

The subcompact iA sedan, a derivative of the Mazda2 and built by Mazda at its new Salamanca, Mexico, plant, and the compact iM hatchback, based on Toyota’s Auris 5-door sold in Europe, went on sale in late summer in the U.S.

“There are some (returning) Scion buyers, but it’s typically a new buyer to Toyota, to the family,” Gilleland says, noting half the brand’s sales over the past few years are to people who’ve never purchased a new car before.

Among existing car owners, the top five most traded in marques for the iA are Toyota, Scion, Chevy, Ford and Honda, while buyers of the iM most frequently trade in a Toyota, Scion, Honda, Chevy or Jeep.

Both models have a median customer age of 35, just a notch lower than the brand’s median buyer age of 36.

This year through November, Scion sold 5,797 iAs and 3,852 iMs. The additional volume provided by the new nameplates put brand sales in the black in September, the first positive result for Scion since May 2013.

All other Scion nameplates are down for the year, with the discontinued xB declining the least, 5.1% to 14,337.

Of Scion’s older models that haven’t been discontinued, the tC is performing the best and is the brand’s biggest seller, despite slipping 9.7% through November to 15,483.

Unlike the 2-door FR-S, the tC is showing more staying power, which Gilleland believes is due to its relative utility and larger audience. “There’s still a market for that 2-door coupe,” he says.

The FR-S is doing what other sports cars before it have done, falling off precipitously as it ages.

Gilleland says he is not in the loop on a successor, despite reports manufacturer Fuji Heavy Industries wants to do a second generation of the Subaru BRZ, possibly with an electric turbocharger, as well as a Toyota Europe official being quoted last year that a next-gen GT86, the FR-S’ overseas twin is in the cards.

The current FR-S, launched in June 2012, is “acting and behaving in the market exactly as I would have expected and what we planned for,” Gilleland says of sales that have declined 25.0% this year to 9,919.

A limited number of people who would buy such a car have stymied every automaker retailing a performance-oriented 2-door with limited seating and cargo capacity, he says.

However, Scion is trying to renew interest in the model with limited edition trim levels and its participation in the Formula DRIFT series.

“The only thing you can really do is try to find some unique ways to entice people to look at the car, because it’s a very finite group of people that are going to buy something like that,” he says.