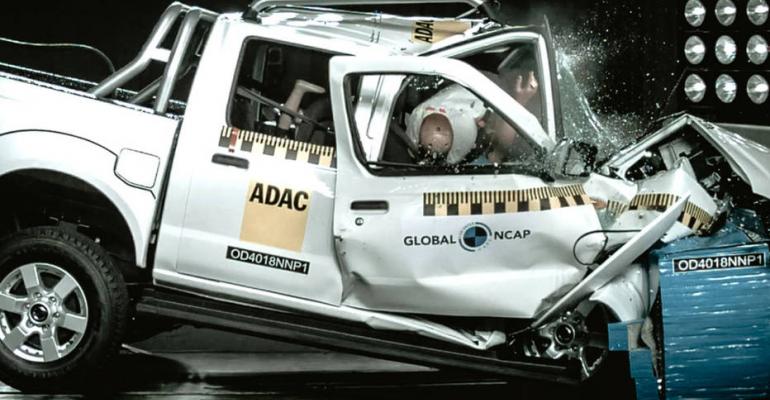 The NP300 Hardbody’s bodyshell collapsed in a frontal-crash test at 40 mph (64 km/h), exposing a dummy in the driver’s position to significant risk of fatal injury, the Global New Car Assessment Program says.

An auto safety-testing organization calls for a halt to sales of the Nissan NP300 Hardbody after the South Africa-built midsize pickup receives a zero-star rating for poor adult-occupant protection.

The NP300’s bodyshell collapsed in a frontal-crash test at 40 mph (64 km/h), exposing a dummy in the driver’s position to significant risk of fatal injury, the Global New Car Assessment Program says in a news release.

“The steering wheel column did not collapse, penetrating the passenger compartment (and) creating an additional risk for the driver as it moved straight into the dummy chest,” the release says. “This performance showed a significant risk of injuries for the driver despite the car being equipped with double frontal airbags.”

“The zero-star result of the NP300 is particularly troubling as the car is fitted with dual airbags and this might encourage consumers to believe that the car has a good level of safety,” David Ward, Global NCAP secretary general, says.

“Indeed, Nissan misleadingly claims that the car occupants are protected by a so-called ‘Safety Shield’ and its ‘Hardbody’ label also conveys an image of strength. However, in our crash test, the car’s bodyshell collapsed and neither the steering column nor the airbags acted as they should to minimize risk of injury.

“In our view, remedial action to strengthen the NP300’s bodyshell is now urgently needed,” Ward says. “This is a concern not just in South Africa but elsewhere as Nissan has plans to increase exports of this vehicle across Africa.”

In a letter to the UN Economic Commission for Africa and the African Development Bank, Ward and Collins Khumalo, CEO of the Automobile Association of South Africa, call for African governments to prevent the sale of zero-star vehicles such as the Nissan NP300.

“These results are outrageous and show unsafe vehicles are being sold to the people of Africa, which no manufacturer would consider selling in other markets,” Khumalo says.

“The safety of our customers is Nissan’s top priority,” a Nissan spokesperson tells the website The Drive via email. “All of our cars meet or exceed regulations in all countries in which they are sold.

“Continuous improvements are being made to the NP300 such as dual airbags and ABS brakes which are fitted as standard equipment,” The Drive quotes the spokesperson as saying. “Nissan is studying further enhancements.”