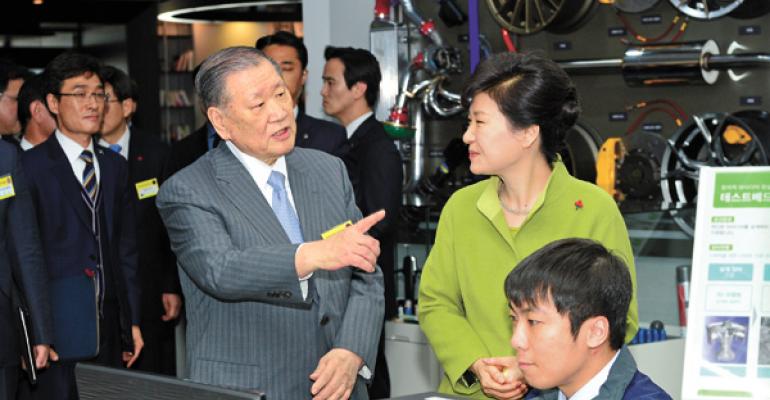 Restructuring May Be in Works for Hyundai Motor

There is speculation in Korea and world investment markets that Hyundai Motor Group soon will restructure itself as a registered holding company, shedding its current status as a loosely affiliated group of separately owned, registered and managed companies.

While some 50 companies are considered to be affiliates, Hyundai Motor Group has no shareholders, no registered board of directors and does not file government-required earnings reports.

Hyundai Motor Chairman Chung Mong-koo’s title as chairman of the group is one of convenience.

Many of the various companies do have interconnecting ownerships, holding stakes in some of the other affiliates. Chung himself has a personal shareholder’s stake in several of them.

One clue to the move is that Hyundai Motor and its Kia automaking affiliate are merging their global public-relations operations into a single entity that will serve both brands. This transition has not been announced, but staff members of both companies are organizing the new entity and handling new functions.

Analysts see this as a first step in Hyundai Motor becoming a holding company that will earn royalties and other income from the various affiliates under a legally constituted holding-company ownership structure.

Hyundai Motor, which until now has made all statements for Hyundai Motor Group, has no comment on the restructuring activities.

The speculative reports have driven the stock prices of all three major affiliates to near-record gains this week.

South Korea's National Assembly is pressuring various family-controlled company groups such as Hyundai, Samsung and others to reorganize into regulated, transparent business organizations with greater shareholder control and responsibility.

The recent impeachment and removal from office of Park Geun-Hye and revelations that some family groups contributed huge donations to shell charities that allegedly benefited the South Korean president and some of her associates have spurred the call for reform.

Hyundai Motor is one of the companies alleged to have made large contributions to phony charities in return for, or hope for, favors from the Park government.