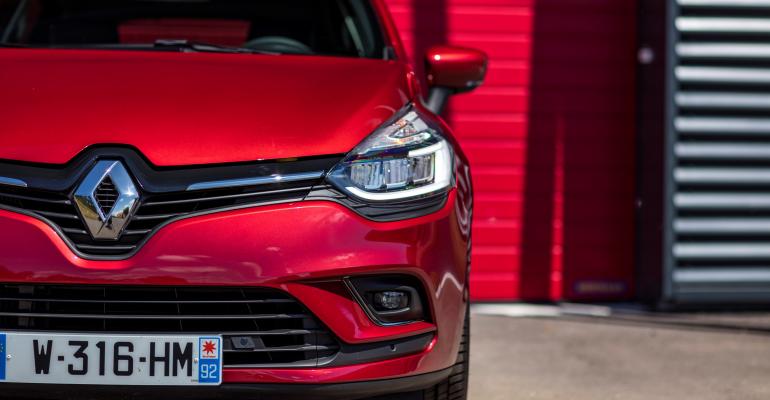 If the Clio premium subcompact hatchback breaks cover as a Renault vehicle, analysts believe it will be the beginning of a complete conversion to the Renault brand in Korea.

When RSM makes a full-scale launch of the imported Twizy 2-seat electric vehicle in Korea this month, the Renault diamond badge will be left in place, in a move to keep costs down.

If the Clio breaks cover in Korea as a Renault vehicle, analysts believe it will be the beginning of a complete conversion to the Renault brand. Many believe the stronger identity of the French automaker would boost the public image of vehicles built at RSM’s single assembly plant in Busan and of those it imports from Renault plants in Europe.

Others think loss of the Samsung identity connection could sour consumers in the historically nationalistic Korean market. However, the recent onslaught of imported foreign brands indicates the country’s marketing dynamics have changed.

Changing the Clio’s identity to that of an RSM product would be not merely a matter of swapping badges, but an expensive undertaking that adds cost to the vehicle, Park says.

For instance, the Clio’s hood and lower front fascia are deeply notched to accommodate the large Renault diamond.  The RSM flattened oval has a horizontal format, so expensive sheetmetal modifications involving development of new dies likely would be required.

RSM’s strong interest in importing the Renault Zoe from Europe is spurred by the recent election of Moon Jae-in as South Korea’s president.

Moon’s spokesmen confirm his campaign promise to take action to boost the EV share of South Korea’s automotive market as one of the measures for reducing transient emissions and helping clear the air for city dwellers.

His promise reinforces the goal vaguely expressed last year by Korea’s Ministry of Trade, Industry and Energy that it will increase the number of EVs in Korea to 250,000 units by 2020.

As of the current count, that calls for selling an additional 237,000 EVs in Korea over the next two years if the goal is to be met.

As of April, the total number of EVs registered in Korea stood at 13,812 units.

A 40% share of the registered EVs is held by Hyundai’s Ioniq, which has 5,581 units on the road. Next is Hyundai’s affiliate, Kia Motors, with 2,575 Soul EVs in use by consumers. RSM’s SM3 ZE, a battery-electric sedan version of the SM3, is close behind with 2,547 units.

GM Korea, a latecomer which only this year launched its imported Bolt EV, has just 16 units in the count, but it has sales contracts for its full 2017 allocation of 400 units.

Korea’s remaining 1,711 registered EVs are claimed by importers, with BMW Korea’s compact i3 holding the lead with 827 units on the road.

The original sales goal for RSM’s Twizy this year was 1,000 units – a bold target, considering the subcompact EV sold just 2,514 units in all markets in 2016.

However, even before the first sold Twizy rolls out of a Korean dealership, RSM has 1,200 preorder contracts in hand. Based on this, RSM is considering asking Renault to raise its 2017 allocation to 1,500 units.

RSM currently imports only two Renault models into Korea, the Twizy and the Captur compact CUV, which it rebadges and sells as the QM3. Both models are imported from the Renault plant in Valladolid, Spain.

The QM3 has been Korea’s largest-volume imported vehicle since its introduction in 2013, when it was named Best Car of the Year at the 2013 Seoul auto show. It is credited with turning around RSM’s sales and positioning the company to overtake Korea’s No.3 automaker, GM Korea.

All other vehicles marketed by RSM in Korea are either rebadged Renault models or Korean-built cars based closely on Renault models that are assembled at the Busan plant.

Turning things around so as to introduce the Korean flavor in Renault markets around the world, RSM designed and developed the QM6 large SUV at its Yong-in City design and development center. It replaced the QM5 (Koleos).

Though developed and assembled in Korea, the QM6 is exported to Europe and other global markets under the Renault badge as the new, larger version of the Koleos. It also is produced in China by the Dongfeng Renault joint venture.

Korea Figures Big in Renault’s Foray Into China
May 19, 2016