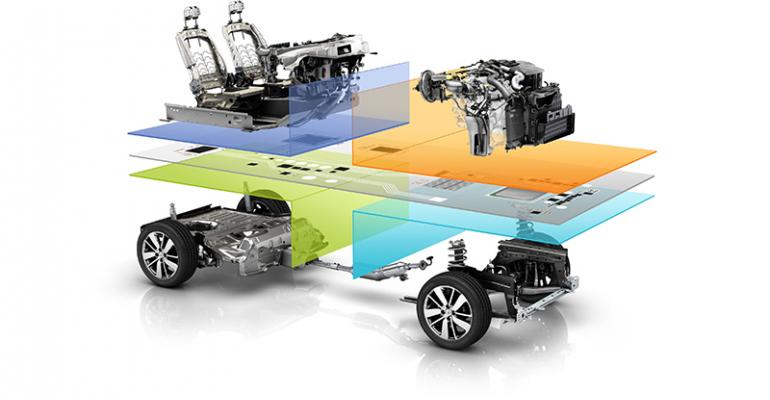 The Common Module Family architecture allows the automaker to leverage economies of scale and improve quality by using commonized vehicle modules across segments.

NASHVILLE – The Renault-Nissan Alliance plans to have nearly 80% of its lineup based on its Common Module Family architecture by the end of the decade, a top executive says.

Pierre Loing, vice president-product planning for Nissan North America, says CMF mostly will be used in developed markets, such as the U.S. and Europe.

“Mature markets are the ones leading the charge, because the volumes (are large) enough to justify flexibility,” he tells WardsAuto during a media event here. “In less-mature markets like Africa and Russia you really need to engineer cars around price in those places.”

The automaker says CMF can be employed across a number of platforms, ranging from compact to large cars.

The alliance's upcoming CMF-A Architecture is aimed at small A-segment vehicles in emerging markets such as India.

CMF for the compact and large segments will include 1.6 million vehicles per year and 14 models, including 11 for Renault and three for Nissan by 2020.

“It takes time if you want to force this on two companies,” Loing says of implementing the CMF strategy.

Loing says CMF components will be limited to areas of the car customers don’t see, with other aspects of the vehicle differentiated to appeal to particular consumer wants and needs.

All global companies either have or will adopt similar strategies, he says, noting it’s the only way to ensure success in today’s market.

“The car industry is about volume, because there is a low margin per unit,” Loing says. “You need a strategy like this to be successful.”

Loing admits there will be challenges along the way, especially in designing components that meet varying criteria around the globe.

“This is an industry that is subject to crazy regulations,” he says.

The all-new ’14 Nissan Rogue CUV is the first vehicle to launch that was engineered using the CMF strategy.  Vehicles to follow include the new Nissan Qashqai and X-Trail CUVs later this year, and the Renault Espace van, Scenic compact and Laguna sedan in 2014.