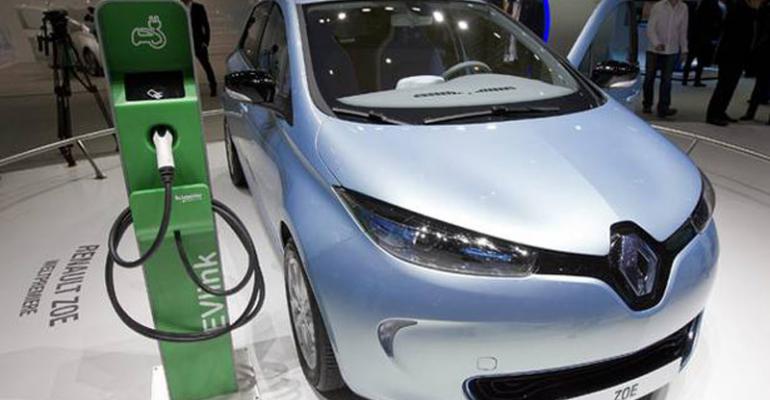 While sticking with traditional proportions for the Zoe&rsquo;s design, Renault insists on an exclusive recharging system.

PARIS – Renault’s purpose-built Zoe electric car is in the same segment as the auto maker’s new Clio IV and is available at about the same price in France, thanks to a €7,000 ($9,100) discount from the government.

But while the Clio is the fourth in its series and has thousands of previous customers, the Zoe is blazing a new trail.

The first big order for Zoe – 2,000 cars – was from a French government agency that combined requests from various companies and agencies.

Renault also has announced sales to the government ministry in charge of rebuilding industry, and to a chain of stores that is installing public charging points.

Renault is saying little publicly about Zoe’s prospects. Production, sales, orders and potential market size are “competitive secrets,” the auto maker says. What is not secret is the car itself, an attractive, 3,230-lb. (1,468-kg) battery-powered EV with about 80 miles (130 km) of range for everyday driving.

“We had three goals when development started,” recounts chief engineer David Twohig. “It had to be a real car, with no excuses. It had to have the best range. And it had to be beautiful.”

The car has pleasing lines, a rounded nose viewed from the top, jeweled headlamps and taillamps, and a clean, bright interior with soft-touch plastics, a large tactile screen with navigation and other services and a wide instrument panel featuring speed, range remaining and charge-discharge information.

While early designs for the car in 2009 were edgier, executives decided “the transition from internal combustion to electric power would already mark a major break in customer habits, so it was important for the styling of Zoe not to be too perplexing,” Twohig says.

The winning choice, he says, reflects “formal cues of automotive design in its lines and proportions.”

Twohig and Steve Norman, Renault’s executive vice president-marketing and communication, believe the EV meets those goals, but having the right product is no guarantee of business success.

The Nissan Leaf, introduced by Renault’s alliance partner in 2010, is proof of the problem. The Leaf won Car of the Year awards in America and Europe, but sales are well below earlier stated goals.

At Renault’s financial press conference Feb. 14, Ghosn said he was satisfied that EV sales are rising at the same pace as hybrid sales did when Honda and Toyota introduced their first hybrid cars a decade ago.

Now that the Zoe is launching commercially in France and other major Western Europe countries, he says, “After three months, we will know better” about the prospects for sales.

Meanwhile, Nissan has reworked the Leaf, putting it into production in the U.S., boosting its homologated range by 14% to 124 miles (199 km) and cutting its price.

Changes that need to be accepted by Zoe’s customers, even if they love the look and feel of the car, include range, recharging and cost.

The Zoe has a range of 130 miles (210 km) on the New European Driving Cycle, but Renault advertises no more than 94 miles (150 km) with a full useful battery charge of 22 kW of electricity.

When presented to journalists in Lisbon, the car’s onboard computers typically said the range at the start of the day was 81 miles (130 km), calculated from the average over the most recent 18 miles (30 km).

Engineers credit three elements for giving the Zoe better range than the Leaf, which also has a 22-kW battery and plays in the same segment:

While sticking with traditional proportions for the Zoe’s design, Renault insists on an all-new method of recharging.

Nearly all earlier EVs, including Renault’s Kangoo ZE, Fluence ZE and Twizy, can plug into normal household outlets to recharge batteries slowly. But the auto maker insists the Zoe be recharged with a €860 ($1,125) wallbox installed by professional electricians, using a cable with a hair-dryer-sized plug at each end.

Using big Mode 3 sockets for the connection is safer and handles more current, says Twohig, and the design is meant to accommodate future intelligent charging.

Household plugs in Europe are called Mode 2. Although 220V is normal across the region, amperage and the form of the socket and plug vary by country.

A wallbox sold by Renault will recharge the battery in six to nine hours, but it also can handle the tri-phase electricity, which allows faster recharging, that is found in 20% of French homes.

The cable delivered with the Zoe can handle recharging up to 22 kW of the battery’s 30-kW capacity, or about 80%, in one hour. Most public recharging spots in Germany are this powerful.

One of Renault’s 65 patents on the EV involves using the car’s motor windings and inverter electronics as an on-board charger. That means the single recharge socket under the Renault logo at the front of the car can handle a 43 kW fast charge from a dedicated cable for a 30-minute, 80% recharge.

Renault boasts that having the charging electronics on board lets the infrastructure use less-expensive charging posts, but currently it is the only auto maker using this approach, although it is willing to   license its technology.

In fact, 43 kW public fast-charge posts are scarce in Europe, and France has few public recharging posts of any kind except in Paris, where 250 charge points of the 4,500 in the Auto’lib car-sharing program are adapted for use by the Zoe or other EVs.

Zoe customers along the French-German border have another problem. In France, the Mode 3 infrastructure side socket is oval-shaped and has shutters to protect the contacts. In Germany and the rest of Europe, the infrastructure’s Mode 3 socket is the so-called Menneke type, circular with an arc cut off.

The Zoe, without battery, starts at €20,700 ($26,900) for the entry-level model. The Zen or Intens trim levels add items including bigger wheels, perfume dispenser, air ionizer, Teflon seat fabric and more goodies behind the R-Link tactile screen, for an extra €1,800 ($2,340).

However, for the next year or more, France will cut €7,000 ($9,100) off the price. And electricity is less expensive than liquid fuel on a per-kilometer basis, which means if a motorist drives enough kilometers, the battery-rental pays for itself and the cost of the car begins slipping.

Other bonuses include 20% lower maintenance costs.

Renault will attack the marketing problem posed by the multitude of costs with a leasing package at €249 ($324) a month that includes the entry-level car, battery and wallbox, says Antoine Godet, director of marketing in France.

While leasing is not common among private customers, it is normal for businesses, and 40% of Clios are sold that way. Renault expects Zoe sales will be split about equally between businesses and  individuals.