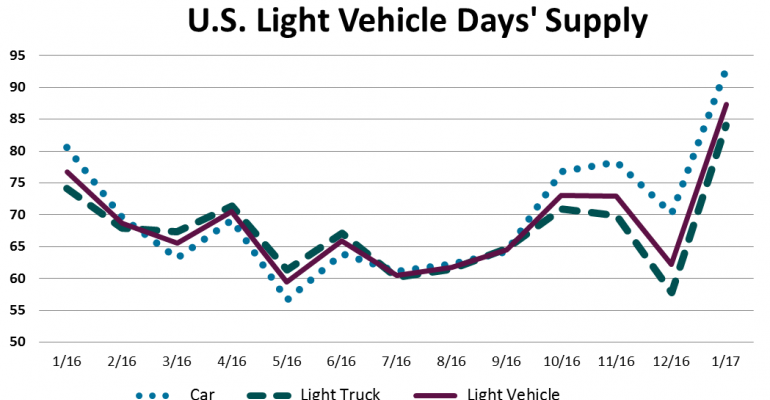 Among automakers, how market leader General Motors deals with rising inventory will have the biggest impact on whether February sales rise or fall.

U.S. dealers ended last month with record January inventory, an early indicator that February light-vehicle sales are primed for another big month at a time when demand should be undergoing a cyclical downturn after seven straight years of increases through 2016.

How high sales actually finish largely depends on incentive activity, but a preliminary look at month-to-month trends indicate there likely will be no let up from the near 18 million-unit SAAR of the past two months combined.

Especially portending a strong February is Jan. 31’s inventory, which ended at 4.03 million units, 8.9%, or 330,000 units, above the same year-ago total, and the highest ever for the month by 140,000 units. Robust inventory levels were the underlying reason December and January were above trend, which WardsAuto pegs at a 17.3 million annual rate.

The bulk of the excess inventory remains in cars, which ended January at a whopping 93 days’ supply. Although car stocks of 1.59 million units are relatively flat with year-ago, sales fell 13% in January and have declined an average 10% per month since last March. In essence, automakers have not been able to cut production enough, or lay out enough incentives, to keep up with the near free-fall in car demand.

Conversely, truck stocks are up 15.5% from year-ago, but days’ supply of 84 is closely in line with WardsAuto’s estimate for a healthy total for this time of year.

Total LV days’ supply ended January at 87, well above year-ago’s 77. The previous two times January days’ supply was higher was 2014, when sales growth temporarily halted in tandem with a Q1 decline in economic output, and in 2009, in the midst of the Great Recession.

By segment, truck stocks for the most part are well balanced with demand, and the preliminary look at the month indicates CUVs, SUVs, pickups and Large Vans will continue year-over-year sales gains.

However, despite too much inventory, most car segments are poised for year-over-year sales declines in February – though the Small Car segment could eke out a favorable comparison depending on incentives and fleet volume.

Especially excessive among car segment groups is Middle Car, with a Jan. 31 days’ supply of 106. Domestically produced versions, which account for roughly 90% of the group’s volume, ended the month with a 108 days’ supply. Production cuts aimed at inventory control likely will be heaviest in Middle Car, but Small Car and Luxury Car also could experience further slowdowns.

By automaker, market leader General Motors will have the biggest impact on demand in February.

GM’s share should rebound slightly from January, when its demand softened due to pull-ahead volume into December, when it led the industry to an 11-year high SAAR of 18.3 million.

The December sales blowout did not put a lasting dent in GM’s inventory levels. GM’s Jan. 31 stocks ended with a 112 days’ supply, compared with 74 a year ago. How GM decides to deal with its extra dealer stocks could determine whether February’s sales end above or below year-ago.

GM dealers are loaded with Small, Middle and Luxury cars. Inventory of CUVs also is high – 96 days – even when taking into account some coming major model changeovers that will slow CUV output.

However, an already-announced shift reduction at one CUV plant, and the upcoming spring selling season – when industry volumes hit their peak each year – could tamp down CUV stocks without additional production cuts.

Besides a rosier sales outlook for GM in February, other automakers in the best position for gains are Daimler, Honda, Nissan, Jaguar Land Rover and Volkswagen/Audi/Porsche.