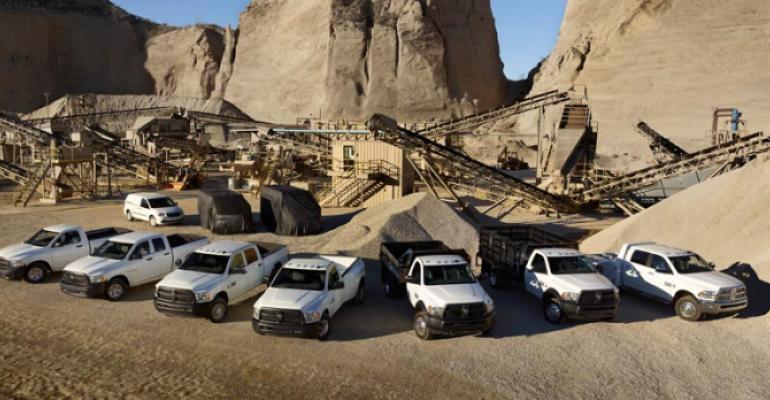 Chrysler is looking to snag market share from Daimler, Ford and Nissan in the North American van market.

LOS ANGELES – The Ram ProMaster large van will debut within the next few months, the Chrysler brand’s top executive says.

Ram President and CEO Fred Diaz does not share much information about the vehicle at the auto show here, only that it is based on the Fiat Ducato and will “have a Ram logo on it.” Even the location where it will be built is being kept secret until the official reveal.

Diaz says Chrysler is aiming for a bigger piece of the North American large-van market, currently occupied by the Nissan NV, Ford Transit and Daimler’s Sprinter vans badged under Freightliner and Mercedes-Benz.

“We’ve been able to capitalize and use (Fiat’s) experience and their expertise with the Ducato. It’s a very, very successful van,” Diaz tells WardsAuto during an interview. “We’re going to bring it and going to go head-on with the competition.

“It’s an award-winning truck, and we’re going to use the technologies, benefits and features that they have – and ‘Ram-ize’ it for the look and feel.”

More than 600 of Chrysler’s BusinessLink dealers will sell the van. Diaz says he is looking to increase the number of dealers as demand for all Ram products continues to increase.

The ProMaster is a collaboration between designers and engineers on both sides of the Atlantic. While the Ducato remains a top seller in Europe, the van has been tweaked for North American consumers, a strategy similar to what Fiat has employed in developing the Dodge Dart from the Alfa Romeo Giulietta.

“The engineers and the designers were able to come up with a good range to make a good combination of all the fantastic technology and know-how that went into Fiat Ducato, and make sure we put our Ram signature trademarks on there,” Diaz says. “We worked really well as a team with our counterparts in Italy to design and figure out how we were going to make this work for the North American market.”

Diaz does not say whether Chrysler will add a diesel-powered light-duty pickup to its lineup anytime soon as Jeep prepares to launch an oil-burning Grand Cherokee next year.

“Diesel’s an interesting powertrain, and taking a look at putting a diesel in a Ram vehicle is something we have been exploring for a long time,” he says. “Whether or not it’s actually something we’re actually going to put in the Ram, we’re not prepared to make any comments on that. But it’s certainly something we have explored and looked at. We’ll see where that takes us.”