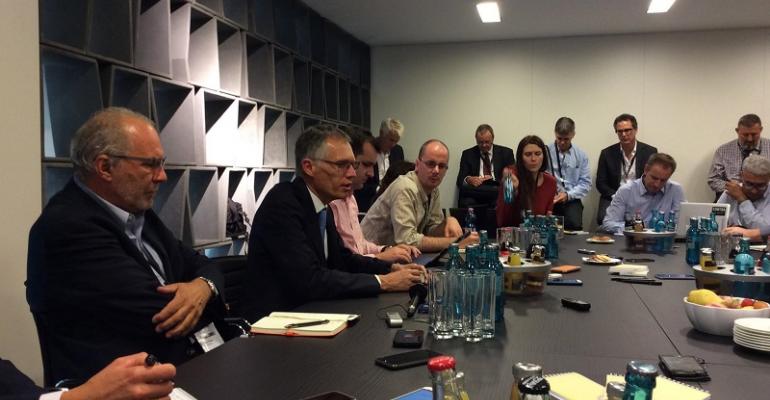 Peugeot left the U.S. in the early 1990s, but this year established a car-sharing mobility partnership in Los Angeles.

FRANKFURT, Germany – While it has dipped its toes back into the North American market with several mobility partnerships, PSA is getting ready to take a bigger leap in the water.

CEO Carlos Tavares says the French automaker is engineering its latest models to be compliant with U.S. safety and emissions regulations.

“We have created a small team to manage the business in North America,” Tavares tells journalists at the Frankfurt auto show. “They are sitting in Atlanta. We are now engineering our cars for them to be U.S.-compliant for the next generation in three to four years, which means that from a few years down the road we’ll be able to push the button if we decide so, in terms of product compliance.”

However, Tavares says PSA is “not in a hurry” and will take its time on re-entering North America. Peugeot left the U.S. in the early 1990s, but this year established several mobility partnerships, including with Travelcar for the peer-to-peer car-sharing service Free2Move in Los Angeles, under the direction of Tavares’ former Nissan co-worker Larry Dominique.

Dominique told WardsAuto in August PSA planned to retail vehicles in the U.S. in creative ways, citing the need for “innovative and digital-minded partners,” but making note of dealer-franchise laws that prevent direct selling to customers.

As for what brands PSA will re-enter the U.S. market with, Tavares says they have been determined but tells media he wants to withhold the information for now.

PSA includes not only Peugeot, Citroen and DS, but also the Opel and Vauxhall brands recently acquired from General Motors.

He says PSA is not uncomfortable with being largely a European automaker, but notes relegating sales to a relatively small region exposes the company and its brands to risk should Europe see a downturn in new-vehicle sales.

PSA therefore is expanding in other parts of the world, including Africa where it is opening a new plant in Morocco, as well as in Latin America, India and Iran.

“I don’t think there is anything wrong about being a strong European player, but it is true we are highly dependent on Europe,” Tavares says.

With the acquisition of Opel and Vauxhall, PSA expects European sales to go from 3 million annually to 4 million. Through July, PSA Western European light-vehicle sales (excluding Opel and Vauxhall) were up 4.8% to 1.24 million, WardsAuto data shows, placing it second in volume behind Volkswagen (1.99 million).