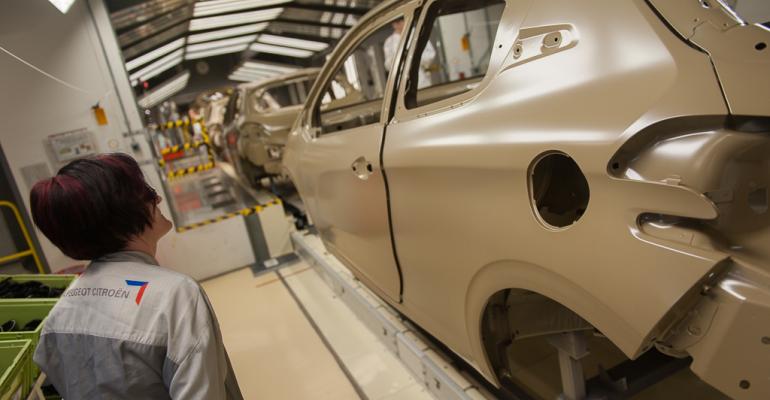 The facility, which makes Peugeot 208 hatchbacks and Citroen C3 Picasso microvans, launches output of a third model in the second half of this year. What PSA calls a ‟B Mainstreamˮ car is the successor to the Citroen C3 now built at Poissy, France.

VIENNA – PSA Peugeot Citroen is preparing to produce a new model at its site in Trnava, Slovakia. As a part of the project, the French automaker plans to significantly increase production volumes.

The Slovak facility, which builds Peugeot 208 hatchbacks and Citroen C3 Picasso microvans, has been awarded a new model with production set to launch in the second half of this year. PSA describes the new car as a ‟B Mainstreamˮ model. In fact, it is the successor to the Citroën C3 now manufactured at Poissy, France.

Currently, some 3,500 people are working in Trnava on three shifts, five days per week. PSA has signed an agreement with the trade union regarding a fourth shift that will add about 800 jobs when it is implemented in early 2017. Under the agreement, two part-time weekend modes (two days and three days) will be created.

With an attractive weekend premium, employees will receive 70% to 80% of income in 3-shift operation for two or three days of work.

While PSA increases output in Slovakia, it also plans to significantly increase regional content – the share of parts made in Slovakia or other Central and East European countries  for its Trnava-made cars.

‟The regional content of the new Citroen B Mainstream model which will be launched in 2016 will be about 86%,ˮ Girardon says. ‟The target for future models is up to 95%.ˮ

As part of the increase in local content, PSA will add engine output in Slovakia. The automaker said it plans to launch production of 3-cyl. EB Turbo PureTech gasoline engines in Trnava in 2019.

The aim is “to increase the capacity to produce 3-cyl. (gasoline) engines and move production as close to consumers as possible,ˮ PSA says in a prepared statement without providing details about the amount of investment or planned volume.