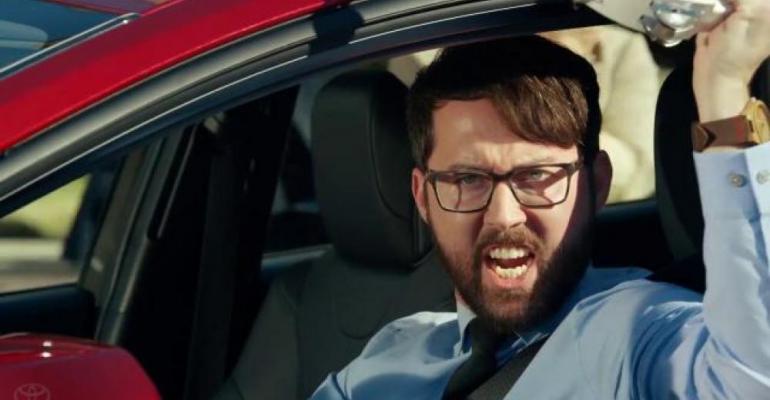 Prius, Ridgeline Super Bowl Ads Grab Most of the Attention

Grabbing the most attention among automotive spots was &ldquo;Heck on Wheels,&rdquo; a Toyota ad designed to humorously showcase the latest Prius hybrid as a high-performance getaway vehicle.

A rampaging Toyota Prius and a sheepish Honda Ridgeline trumped $100 million worth of competitors’ commercials on Super Bowl Sunday with messages that stirred the most emotional reactions of any in the auto sector, according to Nielsen Twitter data analyzed by Canvs.

The auto sector rolled into the big game with pistons pumping, no company more so than Hyundai, which ran four ads filled with humor and celebs after having successfully previewed three of them online with significant marketing campaigns before a single snap of the game ball.

By Super Sunday, however, the ad grabbing the most attention was “Heck on Wheels,” a Toyota spot designed to humorously showcase the latest Prius hybrid as a high-performance getaway vehicle. The commercial sparked 11,954 emotional reactions among 34,393 tweets, both numbers the most of any automaker ad on game day. Reactions were concentrated largely in the “Love” (44%) and “Funny” (27%) categories.

Not far behind the Prius ad was one for the Honda Ridgeline pickup, “New Truck to Love,” featuring CGI sheep serenading the vehicle with a slightly modified Queen song. It generated 9,108 emotional reactions among 20,816 tweets, according to analysis by Canvs. It scored an even higher percentage of “Love” (58%) and also had fans laughing (“Funny” reactions were at 24%).

Audi’s Commander ad was third in terms of emotional reactions, at 7,428 among 20,312 tweets about the space-faring spot, which featured the late David Bowie’s “Starman” as its soundtrack. Of those reactions, 37% fell in the “Love” category and 24% “Funny.”

Hyundai arguably could have rested on Sunday given the big online reaction it attracted in the week before the game. But its “First Date” ad, featuring comedian Kevin Hart as the ultimate helicopter parent, still managed to land in fourth in terms of most emotional reactions, at nearly 5,810 out of 13,149 tweets. It grabbed the crown for highest percentage of “Funny” reactions, at 48%, and also attracted “Love” reactions 31% of the time.