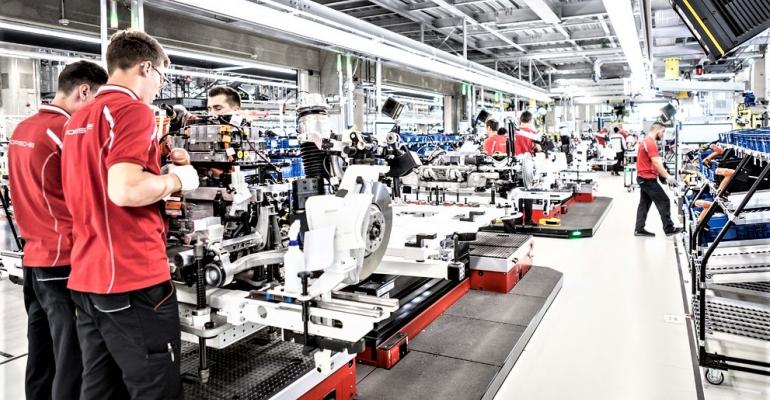 Porsche opens a new production facility for its first all-electric sports car at its Zuffenhausen site in Germany after a construction period of fewer than 48 months and locating part of the plant underground.

Production of the first Taycan (pronounced TIE-con) vehicles began this week, and Porsche says assembly will take place in a factory of the future – flexible, networked and using 4.0 production technology.

In addition to using electricity from renewable sources and biogas to generate heat, the new production buildings are designed to be energy-efficient. There are electrically powered logistics vehicles, the use of waste heat in the paint shop, the greening of roof areas and other potential resource savings.

“It is a further step towards the zero-impact factory with no negative environmental impact,” Porsche says. “Production of the Porsche Taycan with zero-emission powertrain at the Zuffenhausen site will be carbon-neutral.”

The positive response to the unveiling of the Mission E concept EV in September 2015 marked the start of the largest construction project since the Zuffenhausen plant was established.

The same year, groundbreaking was held for the body shop, where the high-strength yet lightweight bodies for the Taycan and the current eighth generation of the 911 will be built.

“We’ve built a factory inside a factory – in the middle of the city and close to our neighbors, in the most confined of spaces, in the shortest possible time and without disrupting the existing sports car production facility running at full capacity,”

Albrecht Reimold, member of the Executive Board for Production and Logistics at Porsche, says in a statement.