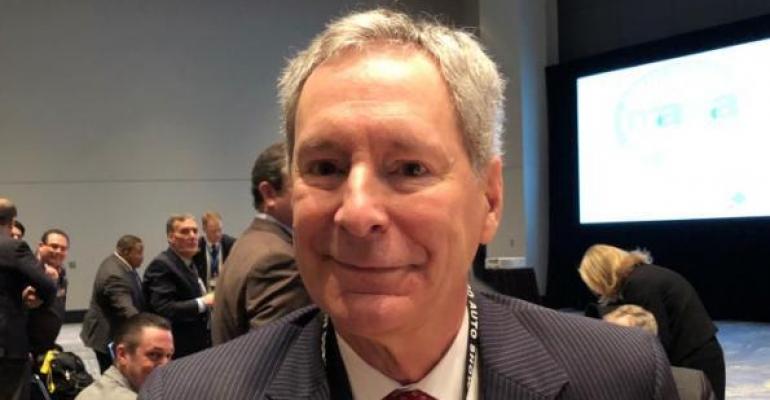 Nine of 10 cars on roads today are personal vehicles, says Tom Doll, adding that the likes of Uber and Lyft are not for everyone, all the time.

Accordingly, he’s not completely sold on some vehicle-ownership alternatives that garner a lot of attention these days, including the prospects of ride- and car- sharing all but replacing personal ownership of vehicles.

“Most people still want a long-term relationship with the car or two in their driveway,” he says during a keynote speech kicking off this year’s Chicago Auto Show.

Nine of 10 cars on roads today are personal vehicles, he says, adding the likes of Uber and Lyft are not for everyone, all the time, and Americans drove 3.2 trillion miles in 2016.

Ride-hailing services “got their start with young people in cities,” but as those users get older and have families, they become more interested in owning their own vehicles, he says.

“Can you imagine a woman standing on a corner with her baby and a diaper bag and trying to fit a car seat into an Uber car?” Doll tells WardsAuto after his speech.

Nor is he particularly keen on the prospects of subscription services some automakers and their dealers are trying out. Those include plans in which customers pay a monthly fee to swap in and out of different vehicles.

Subaru currently offers no such service but is studying it.

“We’re looking at different models to see which one might be OK, but we are not into it as much as other OEMs (such as Cadillac, Lincoln and Volvo) are,” he says after his speech.

Although Doll doesn’t believe humans dramatically change from one generation to the next, he describes today’s consumers as tough customers, especially when buying vehicles.

“Customers want everything the world has to offer,” he says. “They want it to work, and work all the time. If you don’t meet their expectations, they move to the competition.”

Subaru of America, which turns 50 this year, has been on a roll for the past decade. It has seen 10 straight years of year-over-year sales growth, setting records in nine of them. It delivered 647, 956 vehicles last year in the U.S., according to WardsAuto data. In the early 2000s, the Japanese brand typically sold about 100,000 a year.

Doll attributes the company’s continued success to several factors, such as cultivating brand awareness and offering the right product mix that includes an ample number of CUVs in a hot CUV market.

He also credits the brand with fostering customer loyalty. “Our retailers – we don’t call them dealers – don’t make deals. They make promises. If you keep a promise, it creates trust.”

“I’m optimistic for the future, because basic human needs remain the same,” he says, citing trust, warmth and connections. He implies the list includes personal vehicles.