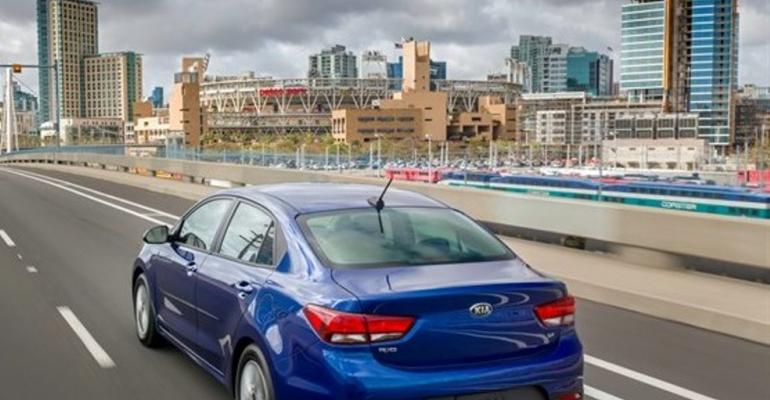 Party Isn’t Over, But Kia’s U.S. Sales Cool Down

NEW YORK – Kia hardly is in trouble, but it’s struggling this year to match its record sales performance of delivering 647,598 vehicles in the U.S last year.

Other than Volvo, Kia had the biggest first-quarter sales decline of any automaker selling in the U.S., down 12.7%

In the U.S., the South Korean automaker offers an 8-vehicle lineup, plus an electric-vehicle version of the Soul compact CUV, as well as hybrid and hybrid plug-in spin offs of the Optima sedan.

WardsAuto: Where does the Rio fit in the lineup and in a market that skews towards SUVs and CUVs?

Hedrick: It’s a global vehicle. For the remainder of the planet, it’s our most popular vehicle, behind the Sportage SUV. The Rio is really important to the global side, specifically the European market.

Compared with other vehicles in the U.S. subcompact car segment, ours is more euro-centric, meaning it has a much more sophisticated ride. We’ve redone the suspension. It’s on a longer wheelbase.

It’s an important car for us because it is for a buyer who’s really interested in price. We see a lot of first-time buyers. It gives us a chance to begin a relationship with them.

WardsAuto: I attended a Rio media event years ago when Peter Butterfield was head of Kia’s U.S. unit…

WardsAuto: It was 2005. He said he had asked the factory to produce a totally stripped down Rio, right down to handles to roll down the windows. He wanted to be able to offer a basic, basic vehicle. But the factory said it would cost extra to do that, because it would be a deviation from the manufacturing process.

Hedrick: As part of the current global system, that spec of a base Rio with manual transmission exists. So we do have it, but a race to the bottom is not something we really want to concentrate on.

WardsAuto:  What is your bread-and-butter vehicle?

Hedrick: We have four: Soul, Optima, Sorento and Sportage. Those are our core vehicles. We have strategic models. One is the new Stinger sports coupe we just introduced at the Detroit auto show this year.

WardsAuto:  The Stinger’s expected contribution to the brand would be to increase sales or increase brand awareness when it comes out later this year?

Hedrick: Both. It’s a car we never fielded before. We’re looking to have a buyer we never had access to before, which is the auto-enthusiast set. That vehicle, more than any other, is the biggest game-changer for us because of the dynamics and design.

The car was a huge hit in Detroit. There was a surprise that Kia could field that type of vehicle. When driving that vehicle, you know within 30 seconds it doesn’t drive like any other previous Kia. Which is the point.

WardsAuto:  What about the hot CUV/SUV market? Are you comfortable there with your lineup?

Hedrick:Yes. We have the Niro, which we just introduced as our dedicated green car. We have the Soul and then the Sportage and Sorento. So we’ve got good coverage.

WardsAuto: The boxy Soul didn’t start out as a CUV, did it? It was more of a specialty car that morphed into a CUV.

Hedrick: Its strength is its ambiguity. You can’t put it in a box, no pun intended. It has broad appeal as a compact-car substitute. A lot of people appreciate that it has a high-ride height. It has a surprisingly large interior for its compact exterior. You’re right, it didn’t start out as a CUV, but a lot of people place it in that category.

WardsAuto:  Kia has been struggling with sales lately. What do you think is going on there?

Hedrick: We had a really strong 2016. We had record sales. So we’re being measured against that year. And although we cover the SUV field, we don’t have the adequate supply we’d like.

Except for a dedicated European factory making vehicles for that market, the Sportage comes out of one global plant in Korea. So we’re competing with a lot of the other markets. For us, that’s a big issue. We’d love to have more. We could do a lot with more. Same thing with the Niro, a huge hit.

Much of it is the supply base. We’re working hard to get that corrected. But it’s relative with our sales. We’re still doing great. We just aren’t having a year like last year.

WardsAuto: What are dealers telling you these days?

Hedrick: The biggest thing is we’re seeing a lot more intensity of competition. The market is getting much tougher, specifically for sedans. It’s becoming brutal. There is a lot of capacity out there. If you want a sedan, there are some great deals. That’s front and foremost for a lot of our dealers. We want to make sure we adequately support them for that business.

We are participating in the market shift to CUVs. Obviously, if we had more, we’d have a higher rate of participation.

WardsAuto:  Do you see sedans ever making a comeback?

Hedrick: One of the things people like about CUVs and SUVs is the high seating position. In years past with those vehicles, there were trade offs, such as fuel economy, ride, handling and price. But those gaps have narrowed.

It’s like real estate. Once you have a house on the hill with a nice view, it’s tough to go back down to the flatlands.