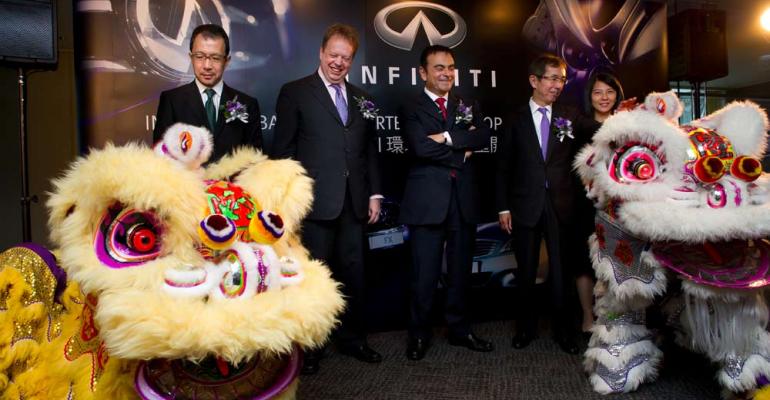 The high profitability of successful luxury brands motivated the Japanese auto maker to retain its premium marque, but not without making some changes.

DETROIT – In nearly 24 years of existence, the Infiniti luxury brand has been less than a stellar performer.

Parent Nissan had a volume-rules mentality when it came to Infiniti sales, says Nissan Executive Vice President Andy Palmer, and little attention was paid to developing the type of products that have made the German brands so desirable.

“Very frankly, very candidly, we don’t need Infiniti, we just don’t need that brand,” Palmer tells WardsAuto in an interview at the 2013 North American International Auto Show here. “Mr. Ghosn challenged me and said, ‘We don’t have to do Infiniti, you can cancel it if you want.’”

But with luxury brands typically accounting for half the profits of auto makers that have one, Palmer couldn’t help but see a future for Infiniti – if Nissan would commit to doing things “properly.”

“(Infiniti has) nice premium cars, but frankly, (they’re) kind of discount,” he says. “And we’ve been selling those cars over a period of 23 years with a Nissan-push mentality.”

Many luxury brands owned by volume manufacturers fall into that same trap, he says, except one: Audi.

Audi has escaped any negative connotation from its association with midmarket Volkswagen by maintaining some autonomy, Palmer says.

Keeping some operational distance while still part of VW’s enormous corporate structure has allowed Audi “to create a series of professionals that understand the premium market in a very premium way.”

For that reason, Nissan identified Johan de Nysschen, the former chief of Audi in the U.S., as an ideal candidate to head Infiniti.

Nissan finally got its man last summer after years of pursuit, naming de Nysschen senior vice president of the brand worldwide, but not before making some changes.

Palmer rattles off the list of changes made over the past three years to lure the Audi executive to Infiniti, including the signing of a joint-venture pact with Daimler that will see Mercedes engines under the hood of the new Q50 sport sedan; relocation of Infiniti offices from Japan to Hong Kong and the lucrative Chinese market; and green-lighting the 3-row JX cross/utility vehicle and G37-replacement Q50.

Now with the proper “assets” to right Infiniti’s path, Palmer says he has a commitment from de Nysschen to improve Infiniti much the same way he did Audi.

One of the first things de Nysschen did after joining Infiniti was to back away from Nissan’s previously announced goal of selling 500,000 units globally by 2016, pushing the target back to 2017. Infiniti’s global sales tallied roughly 200,000 last year.

Palmer says de Nysschen told him: “I need some time; I don’t need the volume pressure. What I’ll give you ultimately is a premium brand. And somewhere, by developing a premium brand, you’re not going to be disappointed by the profitability and the volume that comes.”

In an interview with WardsAuto here, de Nysschen says, “If you hold people’s feet to the fire, just for volume, you encourage the wrong kind of behaviors,” referring to discounting and incentivizing at retail.

Selling 500,000 units in “2017 or 2020 is less important than that we develop the brand metrics which entrench Infiniti as an unquestioned member of the club of premium automotive brands,” de Nysschen says. “That is our mission.”

Infiniti will renew all existing models in its lineup, as well as add four new ones over the next four years.

The brand already has confirmed a production compact sedan, based on the Etherea concept, is due in 2015 and a production version of the LE electric-car concept from last year’s New York auto show will arrive in 2014.

De Nysschen says a production version of the Essence concept supercar is a possibility, as is a larger-than-M model, although it’s unclear in what segment that car would be positioned.

“We don’t intend and try and recreate (a) Mercedes S-Class or BMW 7-Series or Audi A8,” he says. “That segment indeed is stagnating. No, we plan to produce a very emotional car.”

The future model would be “very progressive, perhaps even provocative (in) design.” It would be an “aspirational” car, he adds, mixing elements of luxury and performance.

It may be a niche model in cost, but not in appeal.

“I think many people would want it (due to compelling features and design), but it will occupy a premium-price position,” de Nysschen says.