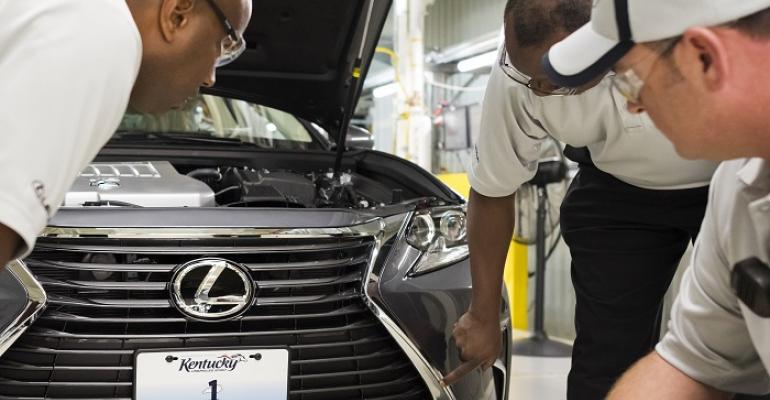 For Lexus&rsquo;s first American-built car, it is relying on the skills of Toyota&rsquo;s workforce in Georgetown, KY, home to the automaker&rsquo;s oldest U.S. plant.

GEORGETOWN, KY – When one thinks of the skills necessary for auto manufacturing, origami probably doesn’t appear on the list.

But the ability to create an origami cat, one-handed, with a non-dominant hand is a critical first step in the training process for stitching the instrument panel of the ’16 Lexus ES.

“Not only do you (have to) fold the (yellow) cat, you can’t have any of the white sides showing. If any of it is white, you don’t pass,” says Rob Lofton, a digitally dexterous former collegiate linebacker-turned-certified stitcher for the ’16 Lexus ES sedan assembled here.

The ’16 ES went into production at Toyota’s sprawling suburban Lexington plant last October, marking the first time a Lexus has been built in the U.S.

The ES’s new home is seen as a win for Georgetown, because while Toyota-brand models are built in high volumes outside Japan, most Lexuses still are manufactured in the automaker’s home market.

Only one other Lexus sold in the U.S., the Canadian-built RX CUV, is assembled outside Japan.

The folding of the paper cat is a skill few workers here need to learn; Lofton says nine certified stitchers currently are enough. But for the 750 dedicated ES workers at Georgetown, 75% culled from the Toyota line, there were many other skills and requisite training to qualify them to work on the car. The luxury brand is a longtime leader in third-party quality and reliability surveys, and brand executives want to maintain that supremacy.

In Toyota fashion, the ES’s longtime assembly plant in Kyushu, Japan, served as the mother plant for Georgetown, passing down skills and processes to U.S. workers who were used to building less-fussy Camry and Avalon sedans.

Mickey Payne, production assistant manager on the ES assembly line, notes there are an average 80 steps in a process for the ES compared with the 25 on the Camry/Avalon lines, giving even seasoned Toyota assembly workers a lot to learn.

“It takes several weeks to learn a process here (for) Lexus, because it’s basically like learning four processes on the Toyota side,” Payne says. The training essentially is the same for the ES line and Camry/Avalon line in that workers need to learn the correct assembly sequence, how to install a part, how to confirm a part was installed correctly and then the repercussions of not installing a part correctly.

Because of the complexity, “we break (training) down into smaller increments – we only present to them what (a worker’s memory) can handle,” Payne says.

Each Lexus Georgetown line worker must learn two processes, he says. Each 80-step process must be completed by workers within the 305-second current takt time of the ES line.

Some 25% of ES line workers are contract employees and they also must learn two processes. For the 75% of ES workers conscripted from the Toyota line, the automaker tried to match their skillsets to the ES line.

Georgetown ES assembly workers must learn how to properly place emblems and plug plates, the correct spacing for interior gaps, how many bolts and grommets to pull out of a bin by feel and proper usage of electric tools.

“We want their eyes to be so keen,” says Tim Turner, quality gate team leader and responsible for the sensory table training.

Kaizen, or continuous improvement, is a basic tenet of Toyota manufacturing.

Many of the skills necessary to build the ES are kaizens from Lexus Japan plants, but Georgetown workers have developed a few of their own.

The tool table in the sensory training area was devised in-house and teaches proper usage of electric fastening tools, a switch from the Toyota side which uses pneumatic tools.

The table is filled with bolts and grommets waiting to be fastened by workers who learn the proper way to hold the tool and the correct torque to apply to grommets. A green light on the tool appears if torque is correct, while the light flashes yellow if the grommets have been cross-threaded.

“(Cross-threaded grommets) would actually shut down the line until a team member fixed it,” says Turner.

It’s expected many of the Lexus ES processes and kaizens will migrate to the Toyota lines, likely for the forthcoming next-generation Camry due to market in 2017. The tool-table kaizen already has been shared with Toyota, which just received its own tables, Payne says.

Other Toyota Kentucky-created kaizens are line-side and include ways to reduce stress and fatigue.

A conveyor ramp was devised by one worker who noted his job process include a lot of unnecessary walking.

“This particular process has a kit box they build up themselves and they take it in the car and they do a lot of work while they’re inside the car,” Payne says. “When they get to the end of the area where they exit the car, they had an empty kit box and they had to take it all the way back to the beginning of their process and set it down back in its home position, but go back to the car and do some more work.”

With the ramp, the empty box is placed at its top and then travels back down to its home position on its own.

Other Toyota Kentucky kaizens include a bin for heavy carpet pieces that lifts up so workers don’t have to bend down, a battery-voltage meter built into a hoist in the battery-installation area and, in the stamping training area, a table with suction cups that deforms steel door panels between 5 and 50 psi (0.3-3.4 bar), teaching workers how to catch wavy distortions that can become obvious once a panel is painted.

Lexus aims for a clean and serene work environment within its manufacturing plants, relatively speaking.

Lexus believes the less-frenetic workspace is a better environment for workers to build vehicles with high levels of quality. 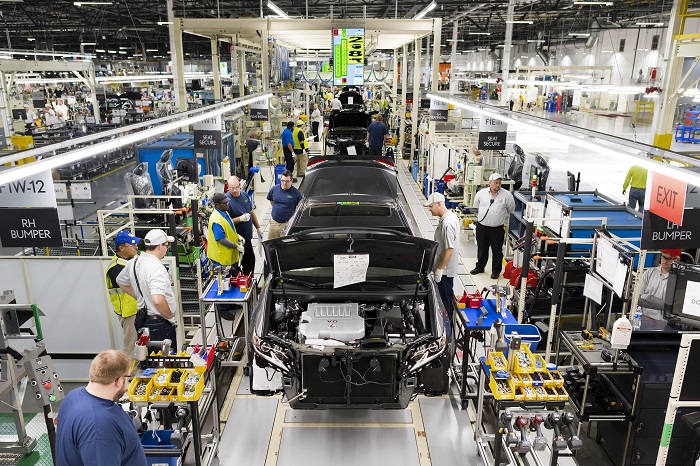 Workers not only must learn new skills but also must understand the Lexus-buyer mindset, which Noburu Hidaka, Lexus manufacturing department senior advisor, says was difficult for some Georgetown workers to grasp.

“‘I don’t stay at hotels Lexus people stay at,’” he says of criticism heard from some employees who couldn’t relate to the lifestyle of a luxury-vehicle owner.

Not all ES sedans being sold in the U.S. are being sourced from Georgetown. The ES hybrid still is imported from Japan, as are some units of the conventionally powered ES.

As the head of a plant mainly assembling cars, James isn’t concerned about the shift of American vehicle buyers toward CUVs and other light trucks. Georgetown once assembled the latter, including the Sienna minivan. It also builds in small numbers the Camry-based Venza CUV, which has been discontinued for the U.S. but continues production here through September as an export model.

“Our plant is designed to be very flexible,” he says.