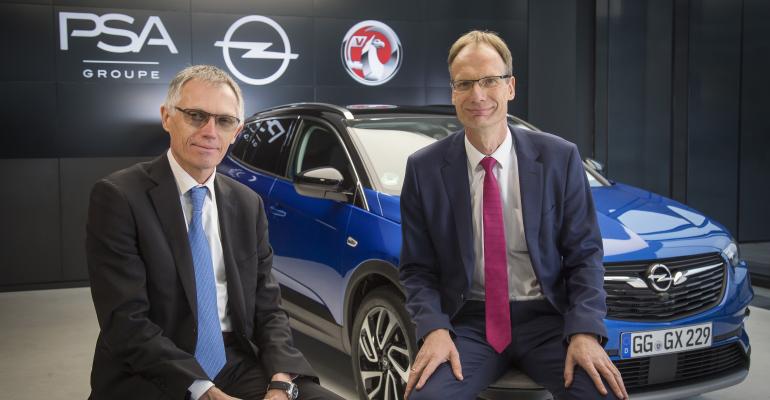 On learning of Opel&rsquo;s plan to drastically cut imports, leaders of the GM Korea branch of the Korean Metal Workers Union went to news media encouraging them to write articles demanding the company pledge to not cut production volumes.

Opel’s recovery plan includes reducing the number of vehicles it imports into Europe by about 200,000 units annually by 2020.

Although the move had been anticipated, the union’s concerns were not unjustified. Opel is a major export customer of GM Korea, traditionally accounting for about 120,000 to 130,000 units in sales.

If Opel sales were lost it would reduce GM Korea’s total annual export volume of 420,000 vehicles by 30%. In 2016 GM Korea had total global sales of roughly 600,000 units, so the Opel loss would account for about 20% of sales on a global basis.

In addition to the reported completely built-up vehicle numbers, GM Korea ships an undisclosed but significant number of Karl CKD kits to an Opel final-assembly plant in Spain. GM Korea will not divulge its CKD export numbers.

On learning of Opel’s intention to drastically cut imports, leaders of the GM Korea branch of the Korean Metal Workers Union went to news media encouraging them to write articles demanding the company pledge production volumes will not be cut.

But the union leadership is not meeting with management to negotiate business conditions or wages. Wage talks, which began in April, have been put on hold while the union elects new officers at the plant level.

The union already has its new president and top officers in place. They were elected early in March to replace officials who were arrested and charged with selling jobs and other abuses of office. Some are jailed.

Bargaining is not expected to resume until later this month and will not begin until requested by the union.

Ironically, GM Korea is on a trajectory similar to that taken by Opel before GM decided to bail out and sell the money-losing automaker to PSA. Opel had recorded 18 years of red ink with $19 billion in accumulated losses before GM gave up.

Losing the Opel volumes would be a blow for any company, but some analysts believe it could be fatal for GM Korea because of its current troubled state.

Virtually all production centers, including the two assembly plants and engine plant at Bupyeong, the Gunsan assembly plant and the Changwon small-car and engine plant are running well below capacity. GM Korea sales in October were down 38% year-on-year at 34,535 units. Domestic sales plunged 54% with just 7,672 units sold. Exports were off 30% at 26,863.

The Gunsan plant is in the most-dire straits of the three assembly locations and is a thorn in the side and money-burner for the floundering company. The plant, GM Korea’s newest, was built with an original production capacity of 260,000 units, but that has been halved to 130,000 annually.

However, all 2,000 employees at the Gunsan plant remain on the payroll. The company is paying everyone 70% of their total wage package with full benefits, even though the average employee is working just five or six days every month.

The plant produces the Orlando MPV, which has not been selling well. It began producing the all-new Cruze compact sedan in March and launched the Cruze diesel this month. However, neither of the new Cruze models are meeting sales expectations.

GM Korea still is betting the new models will do well, even though they are sedans in a market where CUVs are taking the lion’s share in all vehicle classes. GM Korea has its own Captiva B-segment CUV, but it has been on the market since 2006. Although revamped last year, the newish allure of the Hyundai Santa Fe and Kia Sorento overshadows it.

To expand its presence in the hot B-segment CUV market with an all-new product, GM Korea is considering importing the Chevrolet Equinox from the U.S. The Equinox will do nothing to ease the Gunsan volume problems, but it could garner significant sales revenue. That segment is booming and the Equinox offers a choice of engines that are well-suited to Korea: 2.0L and 1.5L gasoline models and a downsized 1.6L diesel.

GM Korea is experiencing its fourth successive year of losses. While the company will not disclose its final 2017 financials until April, the Korea Development Bank, which holds a 17% minority stake and a seat on the board, recently reported GM Korea will record losses roughly matching the 630 billion won ($558 million) net loss of 2016. The company lost 350 billion won ($309 million) in 2014 and 980 billion won ($868 million) in 2015. Total losses for the three years tallied 1.96 trillion won ($1.7 billion).

GM Korea’s labor costs increased more than 50% from 2012 to 2015, partially reflecting a 2014 agreement to include bonus payments in the calculation of ordinary wages, which caused soaring additional costs for overtime, holiday pay and severance pay that significantly contributed to losses incurred in 2014 and subsequent years.

GM officials believe there are only two ways to get the company back on a sustainable path. One is to add new product so as to increase production volumes and utilize plants at levels well above break-even. But GM has no new product to put into the plants and if it did, it would be a couple of years for production to begin.

Most of the vehicles now in production were designed and developed on site by GM Korea. Although they are not selling well, they’re still in the early phases of new model makeovers. There now is nothing else in the product-development pipeline to add to the sales portfolio.

The other way to reach a sustainable path is by working cooperatively with the labor union to lower structural costs.

Management is adamant it will not budge beyond its current wage-increase offer. GM Korea CEO Kaher Kazem is meeting with employee groups trying to explain why the automaker cannot increase its offer of a monthly raise of 50,000 won ($45) and incentive bonuses of 10.5 million won ($9,400).

Even the workers at Gunsan who spend only five or six days each month on the job will receive the full pay increase and bonus once an agreement is reached.

While management concedes this year’s wage negotiations are particularly sensitive – with the future of the company possibly riding on a favorable resolution – in the company’s 15 years of existence a new wage contract always has been signed before the end of the year. But this isn’t just any year.