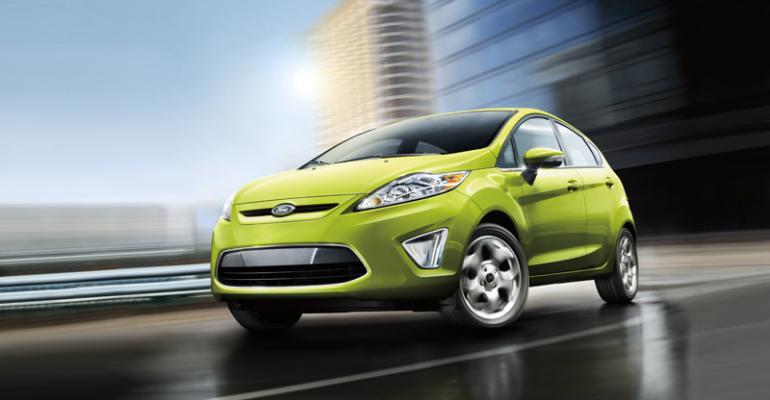 The U.S. auto maker is turning its attention to the key world markets of Europe, Asia/Pacific and South America, where it faces issues ranging from overcapacity to slowing sales.

Whoever takes the reins at Ford after CEO Alan Mulally, reportedly set to retire at the end of 2013, may be facing a long list of unfinished business.

When Mulally arrived from Boeing in 2006, Ford was headed for a $12.6 billion annual loss. In second-quarter 2012, the company posted a net profit of $1 billion, its 12th consecutive quarter in the black, but much of that came as a North American turnaround.

Now Ford is turning its attention to other world markets, primarily Europe, Asia/Pacific and South America.

All three regions pose new challenges for the next leadership team, but the situation in Europe is critical and could derail Ford’s hard-fought to come back from near bankruptcy. The auto maker posted a Q2 pretax loss of €308 million ($404 million) in Europe this year in the 19 markets it tracks and expects its full-year losses to be about €762 billion ($1 billion).

Mulally summarizes the problems facing the European market as sovereign debt issues, overcapacity and weak vehicle demand, but he stopped short of outlining the auto maker’s strategy to rectify the situation.

“We think (the problems) in Europe are structural and not cyclical,” he said in an August conference call with analyst and reporters. “We have nothing to announce today, but as we develop (a plan), we’ll include all stakeholders.”

Roelant de Waard, Ford of Europe vice president-marketing, sales and service, says Europe accounted for about 18 million units annually industry-wise in 2007, but that number slid under the weight of the global recession to about 14 million units in 2011, now seen as the region’s “natural demand.”

However, annual capacity in Europe is about 21 million units, he says, noting “you can imagine what that means for utilization.

“Normally, the manufacturing sector would restructure, but that hasn’t happened, really,” he tells WardsAuto. “We believe (restructuring) is needed, and there is a role for government to make that happen. This is not sustainable for anybody.”

Ford reportedly plans to shutter its Genk, Belgium, plant that builds the Mondeo midsize sedan, the Fusion’s twin. The Fusion is built in Hermosillo, Mexico, and soon will be produced in Flat Rock, MI. Ford declines to comment on any potential capacity reduction in Europe.

With European consumers increasingly holding back on vehicle purchases, auto makers are piling on incentives to move the metal in an effort to keep factories running, de Waard says, noting Volkswagen has been particularly aggressive.

Ford has resisted incentives and is maintaining its new-car prices to preserve margins. “We have kept our incentives absolutely flat, and we are on record as saying we will prioritize profit over volume,” he says. “It’s a very delicate balance.”

The executive says the small cross/utility vehicle segment represents opportunity for growth. Ford in September announced a slew of new products for Europe, including three CUVs: the EcoSport, Edge and Kuga (Escape).

The move is in line with the One Ford plan, which emphasizes global vehicles and platforms. It’s a strategy Ford has leveraged to great success in North America. Other Ford executives now are looking to One Ford as a blueprint to drive sales and lower costs in their respective regions.

Chantel Lenard, vice president-marketing, Ford Asia/Pacific and Africa, says the strategy “absolutely” will work in the markets she oversees.

“It’s through One Ford that we are able to bring so many new vehicles to APA,” she tells WardsAuto. “Rather than simply import or build current vehicles, we are waiting for new-model-year vehicles to introduce them to APA markets.

“We can customize global products with local tastes, achieving efficiencies through common platforms and core suppliers,” she says. “We do recognize regional differences, and we have the ability to tweak 10%-20% of the product for the market.”

Ford says its Asia/Pacific and Africa markets, which include Australia, New Zealand, Japan, China, Taiwan, India, Thailand, Indonesia, the Philippines, Vietnam and South Africa, are expected to account for 60%-70% of its growth in the next decade.

To capitalize on this, Ford rapidly is constructing new plants. The auto maker since 2006 has invested $6 billion in the APA region and opened two new plants in China, and seven more – five in China and two in India – are planned.

When all the facilities are online by mid-decade, Ford’s combined production capacity in Asia/Pacific and Africa will be 2.9 million units annually.

“We are aligning capacity with demand and making sure we are ready for the next takeoff points, when family incomes increase and they can afford vehicles in China, India and the (Association of Southeast Asian Nations) region,” Lenard says.

Ford offers 14 vehicles in APA, including the Fiesta B-car, Focus C-car and Transit commercial van. It plans to introduce more than 50 new vehicles and powertrains to these markets by mid-decade, including 15 vehicles for China and eight for India by 2015, plus eight vehicles to ASEAN and four for Taiwan.

Ford has yet to disclose what the new products will be, but Lenard says they will allow the auto maker to enter new segments.

Ford has some catching up to do in China, arguably the most important of its APA markets. The auto maker is lagging behind key competitors such as Toyota and General Motors in China, which set up shop earlier than Ford.

Ford’s market share in China is 2.8%, compared with 4.3% for Toyota and 14.0% for GM, which launched Buick production there in 1997. But Lenard is not worried, noting Ford competes with the same auto makers “very competitively, around the world.”

The new products Ford is planning for China, including the Lincoln luxury brand, should help gain ground on its rivals, she says.

Ford, along with other global auto makers, is investing heavily in China, despite the market’s falloff, climbing just 2.5% through August, according to WardsAuto data, far below the double digit gains of 2010 and 2011.

However, Ford continues to add dealerships, with plans to more than double retail outlets by 2015 from the 340 in 2010, the majority of which will be located in the so-called tier-two and tier-three cities in China’s western provinces.

Ford’s goals in APA only can come to fruition if the auto maker is able to overcome stiff competition. The same can be said for South America, says Rogelio Goldfarb, vice president of corporate affairs-Ford Brazil and South America.

“In Brazil today, you have the Japanese producing here, the French and the Germans,” he tells WardsAuto. “You have almost every single brand producing in Brazil or planning to (do so). To keep pace with the competition, we need very competitive products.”

A slew of new government rules also are eating into Ford’s profits in South America, which so far remain in the black. Its Q2 pre-tax operating profit was only $5 million, but that’s a far cry from the $262 million loss in like-2011.

The auto maker intends to address issues in South America in much the same way as in Europe by introducing an all-new lineup over the next two years, starting with the launch of a new Ranger pickup, EcoSport small CUV and Fusion midsize sedan.

“Because of One Ford, our local product-development team is part of the (global) development team, so we could provide input in early (production) stages to meet local needs,” Goldfarb says, noting engineering Ford vehicles to run on ethanol is a requirement, given the region’s reliance on the fuel.

Goldfarb is especially bullish on the EcoSport and Ranger, two segments that perform well in South America.

The Fusion, unlike in most other markets, will be marketed as an entry-level luxury vehicle in South America. “Eighty percent of sales (here) are compact cars,” he says. “So when you compare the Fusion with those products, it’s big and considered luxury.”

Due to government trade policies, the Fusion will be able to slot in under its German luxury competitors in price, Goldfarb says. Because the car is built in Mexico, with which Brazil has a free-trade agreement, Ford does not have to pay a steep import duty. Imported German luxury vehicles are hit with a hefty 35% tariff.

Ford anticipates modest gains in South America this year. “In Brazil, our projections are slight growth, about 0.3%,” he says. “In Argentina, we expect to be at the same level, and in Venezuela we could have a significant increase, maybe 35%.”

Ford is hoping to realize long-term success in South America with the addition of global products that already are proving popular.

Says Goldfarb: “The growth in the auto industry and in many other sectors, including housing, is derived from social mobility, which is the growth of the middle class.”