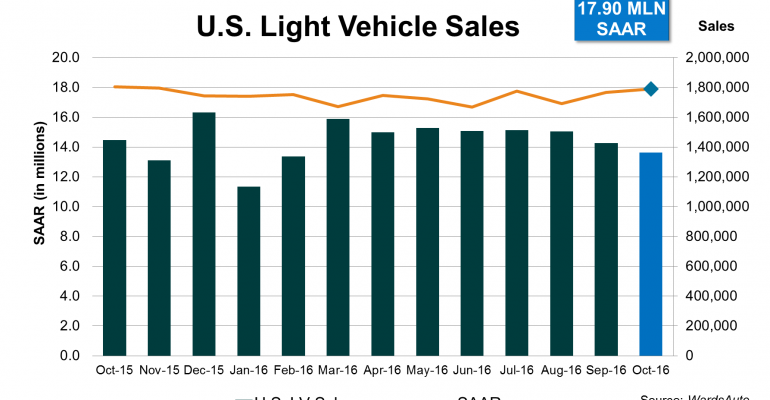 Year-to-date volume lags 2015 for the first time this year, but should rebound above last year in November.

U.S. light-vehicle sales surged ahead in October, rising to the highest seasonally adjusted annual rate so far this year.

The downside to October’s results is the SAAR declined year-over-year for the third straight month, further indication the unprecedented growth recorded since mid-2009 is over.

October’s 17.9 million-unit SAAR topped the 17.8 million attained in both January and July, although it was below year-ago’s 18.1 million. The year-to-date SAAR through October stood at 17.3 million units, same as 10-month 2015’s total.

As they typically do, average incentives – based on initial estimates for the month by TrueCar – declined in October from September. However, they did increase a whopping 15.7% from like-2015, following an even bigger rise in September of 17.3%, the two highest increases this year.

For the first time this year, year-to-date volume lags 2015. January-October deliveries totaled 14.41 million units, a smidgen below year-ago’s 14.44 million. However, November has two more selling days than in 2015, and year-to-date volume likely will rebound back above year-ago, leaving December’s results to determine whether sales rise for the seventh straight year and top the record set last year of 17.396 million.

The one bright spot in cars was the Small Car segment group, which posted a 1% year-over-year increase, its first gain since February. The uptick was punctuated by a 12.0% spike in the econobox Lower Small segment.

There were some big winners in the Upper Small segment, including Mini Cooper, Chevrolet Cruze, Hyundai Elantra, Kia Forte, Toyota Corolla and Volkswagen Golf. Increases by those vehicles partially offset major losses by several other cars in the segment, which recorded a 2.5% overall decline.

For the most part, automakers that have been generally reporting gains over the past few months continued to do so in October.

Also, Honda, which, despite an influx of fresh product somewhat inexplicably posted losses in three of the past four months, recorded a 3.2% increase.

Downturns were posted at BMW, FCA US, Ford, Mazda, Toyota, Volvo and Volkswagen/Audi/Porsche.

Volvo’s 8.0% shortfall stopped a streak of 15 straight increases. During that period its average gain was 36%, but last month it went against a very strong year-ago gain of 80%.