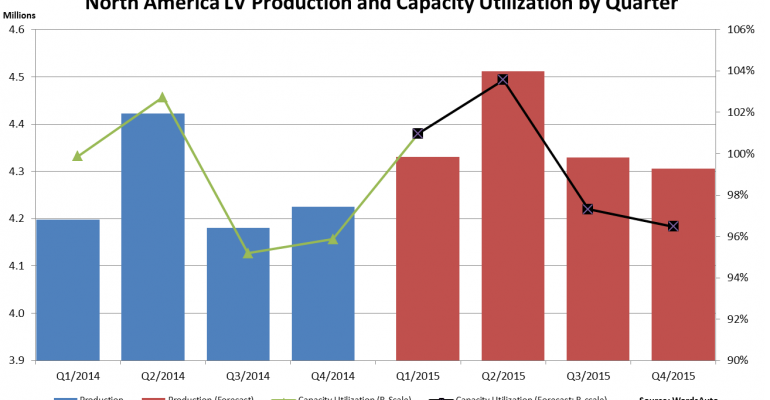 North American light-vehicle capacity utilization ended 2014 the highest since WardsAuto started tracking the data, with 2015 forecast to do better.

The year ended strongly with both Q3 and Q4 posting year-over-year gains after a Q2 decline that was the first in 10 quarters.

With North American LV production forecast at 17.4 million units in 2015, capacity utilization is projected at 99.6%, compared with 98.4% in 2013, and highest in the 10 years WardsAuto has been recording the data. The outlook includes year-over-year increases in every quarter.

North American production leader GM’s Q1 capacity utilization will increase to 96.9% from year-ago’s 92.5%, despite the elimination of the second shift at its Lansing Grand River plant – until production of the next-generation Chevrolet Camaro begins there in Q4 – and the scheduling of short-term shutdowns for inventory control at two additional car plants.

Start of a third shift at its Wentzville, MO, plant to increase production of the Chevrolet Colorado and GMC Canyon small pickups, plus production increases at plants building large pickups, SUVs and CUVs and a small CUV in Mexico, are more than offsetting the aforementioned slowdowns.

In FCA’s case, increased Q1 capacity utilization is a prelude to a decline from year-ago in Q2 when its Windsor, ON, Canada, plant temporarily closes for early tooling for a next-generation minivan that starts production in 2016.

Most manufacturers forecasted for lower year-over-year utilization are close to year-ago totals.

Honda’s Q1 capacity utilization will drop to 90.8% from year-ago’s 95.9% in part because its new plant in Mexico is starting production of a second product, the Honda HR-V small CUV.

After Q1, Honda’s capacity utilization will rebound to above year-ago levels the remainder of the year, especially after production begins of the redesigned Honda Pilot in Q2 and redesigned Civic in Q3.

Ford’s Q1 capacity utilization is forecast at 104.9% vs. year-ago’s 106.6% as a result of production slowdowns at two plants. One slowdown is due to tooling changes at its Kansas City 2 facility for the new Ford F-150, the second is the gradual ramp-up of the redesigned ’16-model Ford Edge in Oakville, ON, Canada.