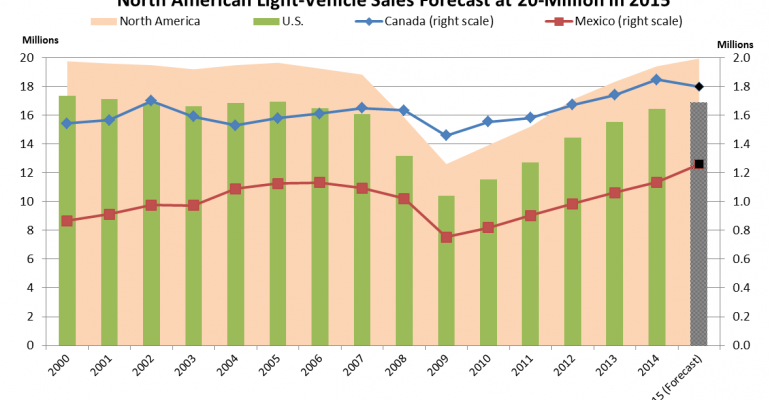 A strong rebound in May and June U.S. sales close to a combined 17-million SAAR is a key to meeting 2015&rsquo;s forecast

North American light-vehicle sales quietly are humming along toward a record 20 million units in 2015, based on WardsAuto’s latest forecast.

Beating the previous high of 19.76 million in 2000 largely hinges on the U.S. and Mexico, while Canada, which has an impressive string of 25 straight year-over-year monthly volume increases, likely hits some bumps later in the year.

The forecast volume is 5.8% above 2014’s 19.42 million, and will be the region’s sixth straight year-over-year increase.

For the U.S., which accounts for 85% of North America’s demand, the 2015 outlook is an upward revision from our previous projection of 16.8 million. Despite April’s unexpectedly lower, though relatively strong, seasonally adjusted annual rate of 16.4 million units, sales are forecast to bounce back based on, among other reasons, expectations of continued income and job growth and pent-up demand.

Key to meeting the U.S. outlook will be results in May and June. If combined May-June sales don’t rebound close to a combined 17-million SAAR, the remainder of the year will have to run well above a 17-million annual pace to reach 16.9 million.

Looking ahead, a constraining factor is that a summer sell-off similar to last year when August’s SAAR jumped 1 million units from July to 17.4 million is not in the cards. Right now, inventory is well balanced overall, and in most cases where it is not, running lean rather than in excess. Except for some vehicles that will undergo a buildup prior to extended retooling shutdowns in late-2015/early-2016, inventory is forecast to remain in that mode the remainder of the year.

Thus, without an unusually high mix of older (’15-model) vehicles to unload before the majority of ’16 models hit the streets in October, monthly Q3 sales should be relatively even.

Another aspect likely limiting U.S. sales is a decline of new-product volume.

Sales penetration of new vehicles – volume of all-new or redesigned vehicles in each month that began delivery within the past year – declined to 12.4% during January-April 2015 from 15.1% a year earlier, and is lowest for the period in five years. In fact, while the industry was up 5.4% year-to-date through April from like-2014, new-product volume was down 32%.

Sales in Mexico are up 22% year-to-date, and the market has a 10-month string of double-digit year-over-year increases. Year-over-year gains are expected to significantly narrow in the second half of the year, but total volume should end the year 11% above 2014.

Nearly flat results in 2015 vs. 2014 in Canada are due to some economic headwinds likely to begin negatively impacting sales in the latter half of the year.