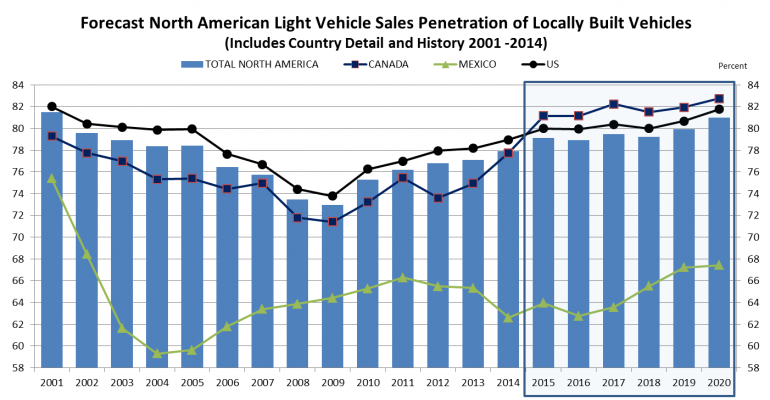 As Mexico lures more manufacturing, its market also is opening up to more overseas-built vehicles with import offerings doubling since 2001.

With well over 1 million units of annual straight-time production capacity for light vehicles being added to the North American manufacturing footprint by 2020, the assumption would be that sales penetration of domestically produced vehicles should soar.

Domestically built vehicles will increase share, but not to the extent capacity increases indicate.

Penetration gains of locally produced LVs will be tempered, because much of the capacity being added is intended for export markets. Also, the number of import models on hand will continue to far outnumber domestically produced offerings, meaning competition will cap gains by North American-built vehicles.

WardsAuto forecasts penetration of domestically produced LVs in North America to climb from 79.1% in 2015 to 81.0% in 2020. That’s still a significant increase, but while annual capacity (and production) rises by 1.3 million units, sales of domestically made vehicles will increase by roughly just half that amount.

The forecasted 2020 penetration is not even the highest on record. Penetration was higher as recently as 2001, when local-made LVs accounted for 82% of sales. In the nine years prior to that, domestic penetration averaged 86%, with a high of 89% in 1996.

Accounting for the disparity between the high number of offerings and low penetration rate is that many of the import vehicles are low-volume niche products or are models sold by automakers lacking a major presence in the market in both sales volume and manufacturing.

Ironically, a large part of the import count is due to Mexico where most of the future production capacity increases are headed.

Thus, as Mexico lures more manufacturing, its market also is opening up to more imports.

There are even brands in Mexico not currently present in the U.S. and Canada, including Peugeot, Renault and SEAT – each only sells overseas-sourced vehicles.

Nearly three decades ago, sales in Mexico were 100% North American-built vehicles, with the vast majority of those, if not all, built in Mexico. Penetration started a precipitous decline in 1997 when it fell to 97% from 99% the prior year, bottoming out at 59% in 2004. Penetration increased slightly and stabilized at an average of 65% between 2008 and 2013.

In 2014, Hyundai entered the market for the first time, sourcing most of its vehicles from overseas, and penetration dropped to a 7-year low 63%. Penetration ticks back up this year (64%), but the increase will be limited, and penetration will fall again next year (63%), mostly because Kia enters the market for the first time in July. Initially, it also will be heavily sourcing vehicles from overseas.

There will be a significant decline in import models sold in North America in 2020 (218) from 2015, and the domestic count will rise to 169. However, even though they are mostly low volume vehicles, imports still will account for 56% of the total in 2020, keeping up the competitive pressure.