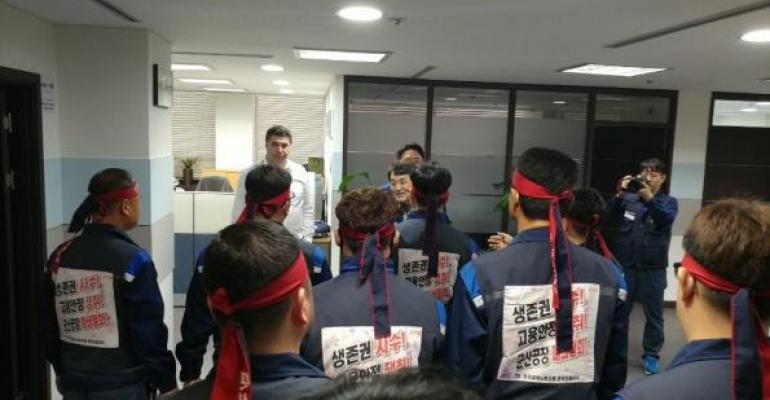 GM Korea hopes to receive interim financing from the Korea Development Bank, but this cannot be provided until completion of a labor agreement that freezes wages and bonuses this year. No talks with the Korea Metal Workers Union are scheduled. &nbsp;

No negotiations between GM Korea and the Korea Metal Workers Union are scheduled as the company sinks deeper into a liquidity crisis underscored by its inability to pay bonuses due to workers, which triggered vandalism and a sit-in at CEO Kaher Kazem’s office.

The money-losing automaker has said it may file for bankruptcy if it misses an April 20 deadline for submitting a restructuring and turnaround plan to parent General Motors and the Korea Development Bank.

GM Korea hopes to receive interim financing from the bank, but this cannot be provided until completion of a labor agreement that freezes wages and bonuses this year. The same condition prevents the company from receiving more funding from GM’s financing affiliates or getting an extension of its current indebtedness to them.

A GM Korea spokesman says Kazem met Thursday, April 5 with KMWU leaders to explain the automaker’s precarious financial position and advise them bonuses included in the 2017 wage agreement would not be paid out on Friday, April 6, as scheduled.

­­­After Kazem left his office following his meeting with KMWU leaders, they entered his office and damaged furniture and other equipment, then conducted a sit-in that lasted 27 hours. Union Chairman Han-taek Lim left the building when the sit-in began.

Local police were called, but GM Korea will not comment on their actions. However, the company plans to file charges against the unionists who participated in the vandalism and sit-in.

“GM respects the right of the labor union to protest but will not tolerate this behavior, so the company is referring this incident to the local police and the Incheon Prosecutor’s Office, with an intent to file charges,” a GM Korea spokesman says.

The union applied April 3 to Korea’s labor ministry for authorization to hold a strike relative to the current negotiations with management, which seeks to freeze wages and bonuses for 2018.

The KMWU said March 15 that it would accept a wage and bonus freeze in a new wage agreement, but under conditions management rejected, including canceling plans to close the underutilized Gunsan plant, raising the worker retirement age from 60 to 65, agreeing to not eliminate any jobs for the next 10 years, and distributing 405 billion won ($378 million) in company stock so as to provide every employee with shares valued at 30 million won ($28,000).

The spokesman says the company will issue workers the benefits portion of their pay on Tuesday, April 10, and will try to secure funding to pay them their full monthly wage on the regularly scheduled payday April 10.

GM Korea also must pay suppliers and salaries for their workers this month. The company does not provide information on those ongoing liabilities. Kazem “didn’t directly say the company is not going to pay suppliers, but the situation might get worse if we do not receive financial support from outside within April,” the spokesman says.

The company also is liable for paying 500 billion won ($467 million) to approximately 2,600 workers who have opted to accept buyout offers.

Additionally, GM Korea is deeply in debt with GM Financial for loans to finance its operations. The loans come due at various intervals, with a large payment due this month.

It is not clear if salaried employees will receive their regular pay on April 25 as scheduled.

Days before the union sit-in, about 5,000 workers and executives from major GM Korea suppliers demonstrated outside the offices of the Korea Development Bank in Seoul. They demanded that union-management negotiations be sped up so KDB can provide interim financing to keep the company afloat.

“Labor and management are discussing a new meeting, but the eighth round of negotiation is not decided yet,” the GM spokesman says.

Plants operated on normal schedules Monday, April 9, except at the virtually idle assembly plant in Gunsan. The company plans to close it by the end of May.