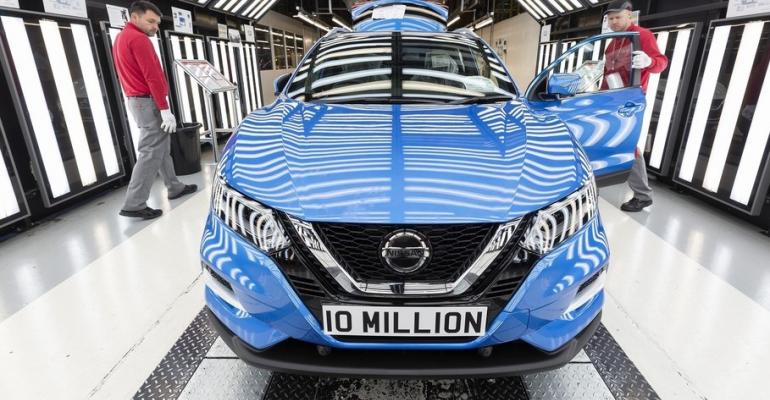 Nissan says on average, a new car has been built in Sunderland, 270 miles north of London, every two minutes since production started in 1986.

Nissan’s Sunderland plant rolls out its 10 millionth vehicle after 33 years – the fastest car factory in the U.K. to reach that figure.

Nissan says it also means, on average, a new car has been built in Sunderland, 270 miles (435 km) north of London, every two minutes since production started in 1986.

The 10 millionth car was a blue Nissan Qashqai Tekna, complete with ProPilot technology, which controls the steering, acceleration and braking in a single lane on highways during heavy traffic congestion and high-speed cruising.

The CUV also is the most-produced model at the plant, contributing more than 3.4 million to the total. The Micra follows with close to 2.4 million.

Steve Marsh, plant vice president-manufacturing, says the Qashqai is one of nine main models to be built at the plant since the first Bluebird was built in 1986, and it is one of three now made at the plant, alongside the Juke and battery-electric Leaf.

Last year, Juke production passed 1 million units, with the Primera the only other model to hit seven figures at just under 1.5 million.

Nissan’s Sunderland plant was built on the site of a former airfield, with a ground-breaking ceremony in 1984. The first Bluebird rolled off the line two years later and production the first year was 5,139. The total workforce at that time was 470, compared with about 7,000 today.

By contrast, in what the U.K. government called a devastating decision, Honda announced earlier this year it will close its plant in Swindon by 2021, with the loss of 3,500 jobs.