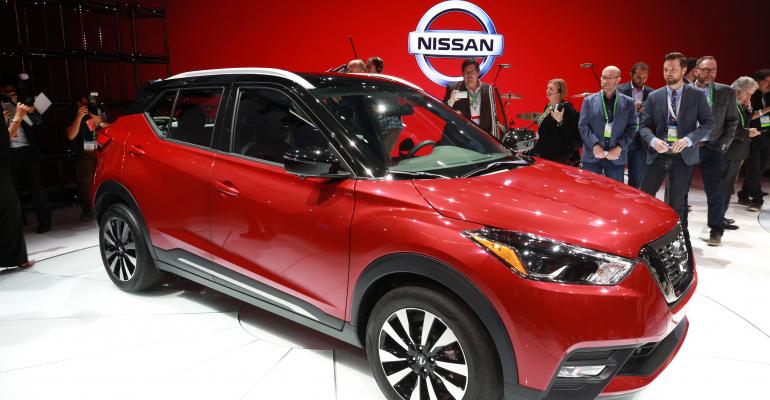 The Juke-replacement Kicks originated as a CUV for the Brazilian market, where it appeals to families, so changes had to be made for the U.S.

LOS ANGELES – Nissan doesn’t expect sales of its new Kicks CUV to suffer for its lack of all-wheel drive.

On the contrary, Michael Bunce, senior vice president-product planning for Nissan North America, expects the new model’s annual volume to stay close to that of the top-selling Small CUVs.

Sales in the 50,000- or 60,000-unit range would put the Kicks midfield in WardsAuto’s Small CUV segment this year.

Nissan’s soon-to-be-discontinued Juke and new Rogue Sport models are in the latter category, with 9,912 and 30,237 sales, respectively, through November.

Also in the bottom portion of the group is Toyota’s C-HR, another small CUV without AWD and tallying 21,889 sales through November.

Toyota’s Bob Carter, president-Toyota Motor Sales U.S.A., says the C-HR’s lack of AWD is hurting its sales potential, as he notes the majority of the small CUVs sold in the U.S. have it.

But Bunce thinks it may be the C-HR’s price point that is a bigger drawback, while noting front-wheel drive can be as sufficient as AWD for buyers in winter-weather states.

“In the U.S. there’s still a great correlation between size and price point, and we look at vehicles like the one you just mentioned where the price point is relatively high. When the customer sees it, they’re looking for AWD,” he says.

Nissan believes the Kicks will perform well in cities along the East and West coasts, such as Los Angeles, due to its crowded highways and tight parking spots.

The Rogue Sport with optional AWD is available for Nissan buyers who don’t want to do without power to all four wheels, Bunce notes.

The Kicks, the first model to be sold in the U.S. on Nissan’s new global subcompact platform, CMF-B, originated as a Brazilian-market model and now is available in Mexico, as well.

Because it is known as a family vehicle in those countries, Nissan had to make some changes for the U.S., where the automaker will target single buyers in their 20s and 30s.

“In the U.S., (the Kicks is) more young, youthful and urban and sporty, so we have different flavors (of interior materials),” Bunce says.

Also compared to the Brazilian and Mexican versions, the U.S. Kicks has a more powerful engine geared toward accelerating quickly onto highways, as well as a changed information-technology unit to support Apple CarPlay and Android Auto.

“They’re expecting this technology, the Millennials, (as) they were the first generation to grow up with technology,” Bunce says of standard Apple CarPlay and Android Auto.

He also believes Millennials, the first generation to “leave the hospital in a car seat,” are expecting standard safety features. Nissan will have on all Kicks trim levels automatic emergency braking and forward collision warning.

Bunce says Nissan will “continue to noodle” over additional CUVs for its U.S. lineup, not wanting to say if with the Kicks, Rogue Sport and Rogue, as well as the Murano and Pathfinder midsize and large CUVs, make for enough.

Something below the Kicks, such as an A-segment CUV to match a future Hyundai offering, is not in the cards now, “but never-say-never,” Bunce says.