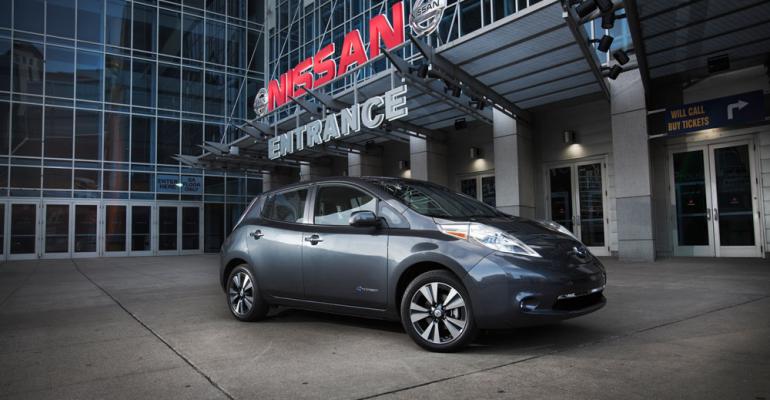 Now that the car, its electric motors and Li-ion batteries are being produced in Tennessee, Nissan is able to bypass Japan&rsquo;s strong yen and drop the &#39;13 Leaf&rsquo;s starting price 15% from the &rsquo;12 model.

NASHVILLE, TN – Nissan is confident its Leaf electric vehicle can come close to the original U.S. target of 20,000 sales annually, following the car’s best-ever month in March with 2,236 deliveries.

The auto maker's optimism is fueled by lower prices for the '13 model after moving U.S.-bound units from Japan for production here and by a renewed market push targeting mainstream car buyers.

"We've got the right offer, and we've got advertising out there to communicate (that)," Erik Gottfried, newly installed vice president-electric-vehicle sales and marketing for Nissan North America, tells WardsAuto at a media event here.

"That's kind of a magical number for retail leasing in general," Gottfried says of the $199 price, adding that it is bringing car buyers to Nissan’s website and dealerships who otherwise might not have considered a Leaf.

The Leaf has had a tough go since its debut in the U.S. market, failing to surpass 10,000 sales in a calendar year. Last year’s deliveries inched up a mere 1.5% from 2011, according to WardsAuto data, leading industry watchers to question not only the Leaf's future, but also the viability of the entire U.S. EV segment.

But now that the car, its electric motor and lithium-ion battery pack are being produced in Tennessee, Nissan is able to bypass Japan’s strong yen and drop the '13 Leaf's starting price 15% from the '12 model year.

"It's a great way to try an electric vehicle for people that are wondering, 'I think this is right for me, (and) here's something that's a little less committing.’ So we're seeing a good lease penetration," he says, estimating more than half but less than 75% of all Leafs sold in the U.S. are leased.

There also are fewer early technology adopters and more mainstream customers purchasing the Leaf. "We love those early adopters, (many) are incremental customers to our brand,” Gottfied says. “(But) it's time to evolve."

Families make up 40% of '13 Leaf buyers so far, and Gottfried hopes to see that percentage grow with advertising that will emphasize the "value side" of the car. "(The Leaf) can really be a potential money-saver for a family when you look at the fuel savings and the monthly lease price.”

The lower price of the Leaf also is proving beneficial for dealers, he says, noting their margins now are better thanks to the EV’s reduced price point. "The car is just naturally more profitable to them."

While Nissan has the ability to build 150,000 Leafs annually on its Smyrna assembly line here, which is shared with other models such as the Altima sedan and Pathfinder cross/utility vehicle, the auto maker is letting demand dictate output.

Upgrades for the '13 Leaf include new creature comforts, such as a heated steering wheel and optional leather seating, while new Michelin tires reduce road noise. There also is a 33% improvement in heating and cooling efficiency, thus drawing less energy from the car's Li-ion battery pack.

Nissan says a key component to greater EV adoption is widely available public charging. Officials note there are 10,840 public charging stations available in the U.S., including 200 480V DC fast-chargers that can refuel a battery in 30 minutes.

In a pilot program with 27 California dealers launched in January, Nissan expects there will be up to 23 DC fast-chargers available in the state by the end of April, and 600 units throughout the U.S. by the close of the year.