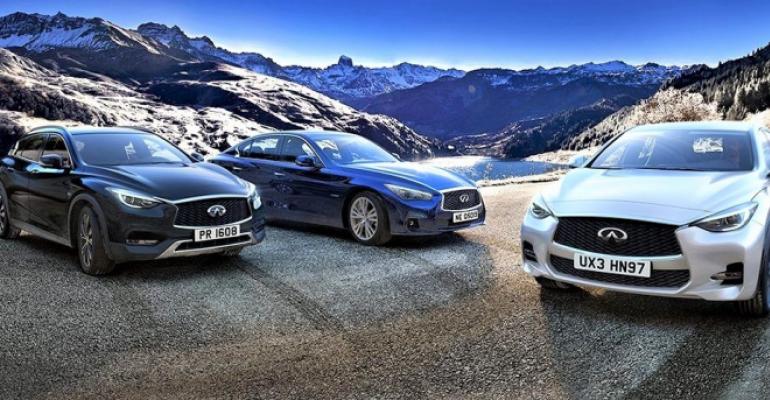 The decision to end production this summer of the Q30 hatchback and QX30 CUV at the company’s Sunderland, U.K., plant comes after Infiniti failed to catch on with European buyers.

Five years after launching Infiniti production in the U.K., the Nissan premium brand is quitting Western Europe to concentrate on North America and China.

The decision to end production this summer of the Q30 hatchback and QX30 CUV at the company’s Sunderland plant, 280 miles (450 km) north of London, comes after Infiniti failed to catch on with European buyers.

Adding Infiniti production was part of a £250 million ($329 million) expansion at the plant that also builds the Nissan Qashqai, Juke and Leaf.

Infiniti says its restructuring plan will have no impact on its Eastern Europe, Middle East and Asia operations, which it says continue to grow.

The new plan will see Infiniti electrify its portfolio from 2021 and discontinue diesel offerings.

“The company will place more focus on its SUV lineup in North America, bring five new vehicles to China over the next five years, work to improve quality of sales and residual value and realize more synergies with Nissan,” Infiniti says in a statement.

In the lead-up to departing Western Europe in early 2020, the company is working to find alternative employment for employees and identifying opportunities for transition and training support.

Infiniti also will work with its retailers to conclude end-of-franchise agreements. Retail operations will continue until a transition plan is put in place for aftersales services, including vehicle servicing, maintenance and warranty repairs.

Launched in 1989, Infiniti has manufacturing facilities in Japan, North America and China. It has design studios in Atsugi-Shi near Yokohama, London, San Diego and Beijing.