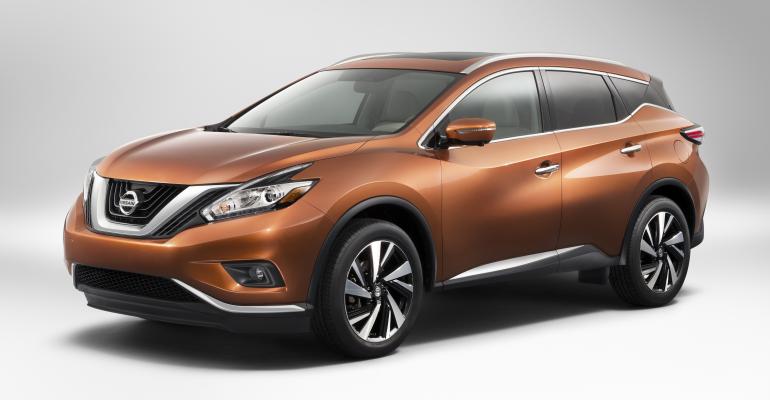 With the launch of Murano production in Mississippi, and assembly of the Rogue CUV in nearby Smyrna, TN, Nissan is well-positioned for the move away from cars to CUVs, a senior manufacturing official says.

CANTON, MS – Americans this year have bought more CUVs than ever before, with WardsAuto’s CUV group tallying a record 3.649 million units through October, a 9.7% increase vs. year-ago.

It’s a change in buyer behavior that is benefiting Nissan and doesn’t appear poised to let up anytime soon.

“The U.S. market (is) moving so quick right now away from traditional sedans to crossovers,” John Martin, senior vice president-manufacturing for Nissan North America, tells WardsAuto in an interview here. “The dealers were telling us, ‘We’re seeing this switch.’ And we don’t see that switch as stopping.”

With the launch of Murano production here in early November, and assembly of the Rogue CUV in nearby Smyrna, TN, Nissan is well-positioned for the move away from cars to CUVs, Martin says.

While it isn’t going on sale until next month, Martin already thinks Nissan will have a hard time fulfilling demand for the new ’15 Murano in the U.S. and globally. Nissan’s Mississippi plant now is the sole source of the Murano worldwide. The prior two generations were assembled in Japan.

According to WardsAuto data, Nissan has about 150,000 units of excess capacity in Canton to fulfill greater Murano demand, however it’s unclear how much of that will be allotted for other models, such as the upcoming next-generation Titan pickup truck.

The Canton plant’s annual capacity is 505,000 units on three shifts.

In the case of the smaller Rogue, which was all-new for ’14, Nissan is capacity constrained in Smyrna and is importing units from South Korea to fill the gap.

“What’s happened, almost tragically, is we’re out of capacity in Smyrna,” Martin says, noting Nissan is assembling at a rate of 660,000 annual units there. Besides the Rogue, Nissan also builds the Altima, Maxima and Leaf cars at the Tennessee plant, as well as the Nissan Pathfinder and Infiniti QX60 CUVs.

“We have nowhere to (expand), and (since) the Koreans (also) were making it we were quickly able to tool up Korea to increase (Rogue) volume,” he says.

Nissan plans to import 80,000 Rogues from South Korea to North America in a 12-month period, and Martin notes there is further capacity at the Renault Samsung plant in Busan if needed to satisfy strong North American demand.

To expand the Smyrna plant for more Rogues would be “massively disruptive,” Martin says.

Nissan could justify the expense of adding capacity at its oldest North American plant but “I’d have to stop production, and that would just be silly in the current market.”

Sales of the midsize CUV were up 23.0% in the January-October period.

The Rogue’s U.S. days’ supply has been under the industry average for much of the year, although U.S.-built units rose to a relatively healthy 52 days at the close of October from 33 days at the end of September.

Days’ supply of imported Rogues was 39 at the end of last month, up from 33 days in late September, but below the October industry average days’ supply for light trucks of 75.