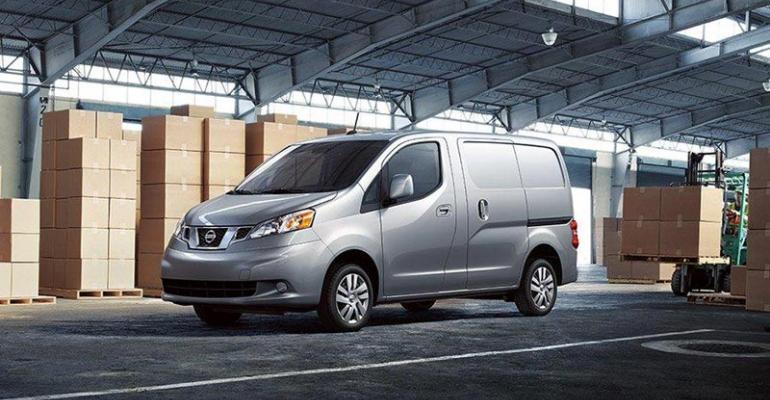 The NV200 small van, launched in the U.S. in March, sold 1,081 units through June. But the result pales in comparison with the best-selling Ford Transit Connect that posted 20,446 deliveries in the period.

SAN DIEGO – Nissan’s entry into the U.S. commercial-vehicle market with its fullsize NV cargo van in late 2011 so far is off to a slow start, but the auto maker expects sales of its recently launched the smaller NV200 to accelerate because there are fewer competitors in the segment.

The smaller NV200, launched in the U.S. in March, sold 1,081 units through June. Deliveries have increased every month since its introduction. But those early results pale in comparison with the best-selling Ford Transit Connect that posted 20,446 deliveries in the period.

“We’re planning to have a gradual ramp-up of volume into the marketplace,” he tells WardsAuto at a media event here. “It is a new segment and growing, and our dealers are new to selling commercial vehicles.”

Nissan has 320 U.S. dealers authorized to sell commercial vehicles, and there are plans to expand the number. To receive certification, commercial retailers must invest in new tools and equipment, install taller service-bay doors, extend service hours and carry a larger inventory of parts.

“Selling this vehicle is very difficult,” he says of the Nissan commercial vans. “With this product, the salespeople have to be very knowledgeable about different (customer) vocations and what kind of up-fits they would need.”

While most Nissan dealerships that offer the vans also have retail operations, CV sales personnel are kept separate and often are required to be offsite visiting with customers.

Another hurdle for Nissan dealers is the pace of commercial business compared with retail. Bedrosian says retail customers typically purchase vehicles during their trip to the dealership or shortly after, but commercial buyers make their purchases in cycles.

“These customers don’t walk into a showroom to kick the tires,” he says. “You have to take the product to the customer, and they have to pretty much set a schedule of when they’re going to retire their current commercial vehicle. They don’t purchase on a whim.”

Facing off against the established Transit Connect poses a challenge for Nissan, but Bedrosian says the NV200 stacks up well in price, driving attributes and features. The Nissan small van starts at $19,990, while the Transit Connect stickers at $22,425.

The NV200’s lower price is an important factor for small business owners. “We see (these) folks who are working out of their small sedan looking at this product,” he says.

The NV200 also offers versatility and is easily modified for different businesses thanks to a variety of features, Bedrosian says, including 20 interior mounting points inside the van for customization purposes and six D-ring tie-down points in the floor of the SV grade.

Rear French doors are split 40/60, with the narrower door on the street side. Both doors can open 90-180 degrees. Side doors slide and lack windows, making a ready surface for business signage.

Nissan says it designed the cockpit for a commercial driver, with an easy ingress/egress seat that sits high and has outboard vinyl wear patches.

As with Nissan’s fullsize van, the NV200’s cabin has space for laptops and a hanging file folder, as well as a pen/pencil tray and dual cupholders. The upper instrument panel allows for storage of folders and documents, while the passenger seat back folds forward for use as a desk.

Standard features include power windows, a 12V outlet and AM/FM/CD stereo with auxiliary input. Bluetooth, SiriusXM Satellite Radio and navigation are available. The navigation system is packaged with the NissanConnect telematics system, which includes Google-powered point-of-interest searches as well as the ability to stream Pandora via an Apple iPhone.

Although Bedrosian contends the NV200 is a superior product to the Transit Connect, he says there is more than enough room for both vans in the segment.

“We see the segment growing over time,” he says. “In the next three years, we expect it to go over 100,000 (sales) a year. So far, the only competitor is the Transit Connect, but there are a lot of businesses realizing they don’t need a uniform fleet composition.”