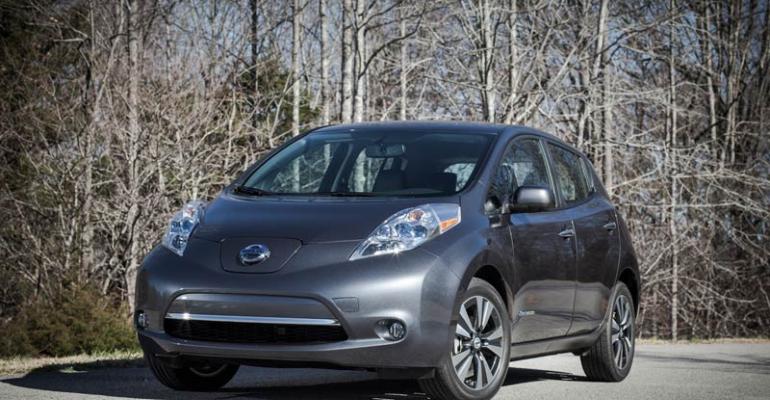 Japanese manufacturing of the electric car for the U.S. turned out to be a &ldquo;disaster&rdquo; after the yen spiked to unprecedented levels, a top Nissan official says.

DETROIT – The decision to drop the price of its Leaf electric vehicle by $6,400 in the U.S. almost overshadowed Nissan’s other news at the 2013 North American International Auto Show last week.

After falling far short of the 20,000 units the Japanese auto maker aimed to sell to Americans annually, the price cut was seen by industry-watchers as a lifeline for the full-battery EV, which tallied 9,819 sales in the U.S. last year.

The price drop from the ’12 to ’13 model, from $35,200 to $28,800, is almost entirely due to Nissan’s decision to localize production of the car and many of its components at its Smyrna, TN, plant, Executive Vice President Andy Palmer tells WardsAuto in an interview.

From when it went on sale in December 2010 through last month, Leafs sold in the U.S. were built in Japan, using largely Japanese-made parts.

Japanese manufacturing of the Leaf turned out to be a “disaster,” Palmer says, after the yen spiked to unprecedented levels.

“When we did the original project, I think it was assumed (the yen/dollar exchange rate would be) around ¥95:$1,” he says. In its two years on the market, the ratio has become as lopsided as ¥77:$1.

“So it was a disaster from a point of view (that when) you started the project five years before, all those things you planned to do – the price position, the advertising – suddenly it’s just eaten by currency.”

Nissan also realized savings thanks to “enhancements” to the Leaf’s lithium-ion battery, although Palmer refuses to be specific about how much cost has been taken out.

“If I told you how much the battery cost or the percentage reduction, to a few people out there it would be utterly shocking,” he says. “Those numbers that (other auto makers) talk about as aspirational, we were there a long time ago.”

In addition to launching Leaf assembly earlier this month in Tennessee, Nissan is producing the EV’s Li-ion battery pack and electric motor there as well. Palmer estimates 85%-90% of the content of Leafs sold in the U.S. will be local.

However, he declines to disclose a sales target for the EV for 2013, after media “fixated” on the auto maker’s earlier projection of 20,000 deliveries in 2012.

Nissan previously stated it could build 150,000 Leafs annually at Smyrna and 200,000 battery packs a year at a new nearby plant. Palmer reportedly says Nissan plans to assemble motors for future hybrid versions of the Altima sedan and Pathfinder cross/utility vehicle at the plant as a way to use capacity.

The Leaf is just the first of several EVs Nissan plans to retail in the U.S.

Next year, a production version of the Infiniti LE concept is due. The luxury brand still hopes to bring the car to market with a fully aluminum body and wireless charging, although some hurdles need to be cleared before the latter becomes reality.

Wireless-charging standards first need to be developed before the technology can be used on a production model, Palmer says. “The issue on wireless charging isn’t the technology. It is the regulatory testing, state by state or country by country.”

And, as with any potential automotive standard, there is disagreement, with Palmer comparing the situation with that of the Level 3, 480V-charging standard for EVs that still is undetermined.

“Generally speaking, we’re trying to work with third-party suppliers (on wireless charging), so we’re building I’d say a body of consensus around what the standard should be,” he says.

Palmer says the technology is reliable in a lab setting and now is ready for prime time. “The charging works. I could show you in the labs. It’s a slow charge, not a fast charge. From that point of view, it’s safe.”

The Infiniti LE production car also is expected to feature self-parking technology when it debuts next year.