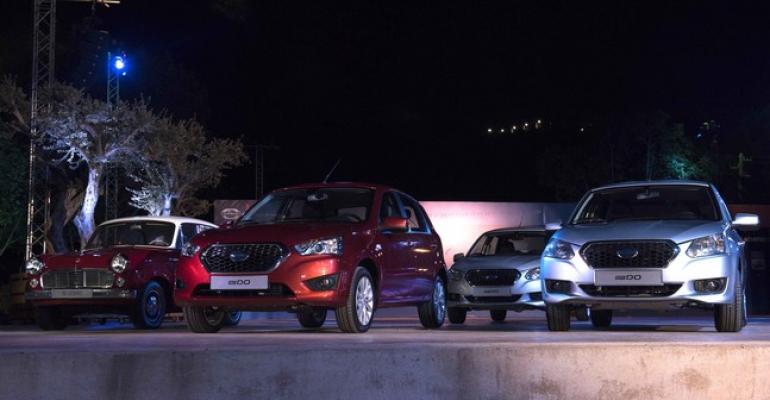 The Datsun on-DO sedan and mi-DO hatchback, two models based on the Lada Granta and Kalina and manufactured by Nissan&rsquo;s Russian partner AvtoVAZ, are available as the brand returns to Lebanon after 49 years.

VIENNA – Nissan is expanding the presence of its low-cost Datsun brand to the Middle East with Lebanon as the first country in the region.

The Datsun on-DO sedan and mi-DO hatchback, two models based on the Lada Granta and Kalina and manufactured by Nissan’s Russian partner AvtoVAZ, are available as the brand returns to Lebanon after 49 years.

‟The launch of the new Datsun models in Lebanon is a historic occasion for us and marks a 49-year journey, bringing back an iconic brand to the market which gave reason for RYMCO to exist,” Fayez Rasamny, Chairman and CEO of importer Rasamny Younis Motor Co., says in a prepared statement.

“We anticipate strong demand for both models and expect to secure entry-segment leadership in Lebanon within the next three years,” Samir Cherfan, managing director-Nissan Middle East, tells media at the launch event.

Nissan relaunched the Datsun brand in 2014. Datsun cars are manufactured in India, Indonesia and Russia. Indian-made Datsuns are exported to South Africa and some smaller markets.

AvtoVAZ produces Datsun cars for the Russian market as well as for the CIS countries Belarus, Kazakhstan and Moldova. Lebanon is the first market outside the CIS for Russian-made Datsuns. Other countries may follow.

“Because of the ruble being very weak these days, Russia became an export base which is very competitive, so we are considering the possibility to export cars out of Russia to some markets outside of the CIS where those cars can be sold,” Vincent Cobee, Nissan corporate vice president and global head of Datsun, tells WardsAuto without providing more details.

As a result of the Russian economic crisis and weak ruble, global automakers are looking for new export markets for Russian-made cars outside the CIS.

Hyundai began exporting cars from its plant in St. Petersburg to Lebanon and Egypt in 2015. Renault started shipments of cars from Russia to Vietnam this year and is delivering painted bodies manufactured at AvtoVAZ to its assembly plant in Algeria. Volkswagen will export Russian-made cars to Mexico.