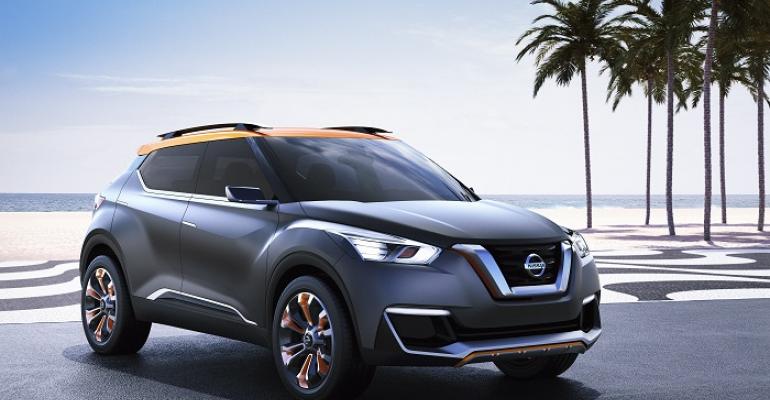 Indicating a U.S.-bound Kicks may be further along than the study phase, WardsAuto product-cycle data shows Nissan will begin assembly this year of a B-CUV in Mexico.

“Certainly we see the opportunity for more mainstream (small) crossovers that are less niche, and we see Honda and others in that space and are taking it very seriously,” Michael Bunce, NNA’s new vice president-product planning, says in an interview here last week.

Bunce’s predecessor, Pierre Loing, had spoken of Nissan needing a more affordable, less niche small CUV model for the U.S. than the Juke, something that would be a direct competitor to the Honda HR-V, Chevy Trax and other models in the burgeoning Small CUV segment in the U.S.

The Subaru XV Crosstrek was the top seller, with 88,927 deliveries.

It is unclear if the Kicks would replace the Juke or be an additional model to it in Nissan’s U.S. lineup.

Bunce says Nissan is studying if the Juke “remains in the (U.S.) market or not.”

Indicating a U.S.-bound Kicks may be further along than the study phase, WardsAuto product-cycle data shows Nissan will begin assembly this year of a B-CUV in Mexico.

The automaker also trademarked the Kicks name per an Oct. 29, 2014, filing on the U.S. Patent and Trademark Office website.

Nissan CEO Carlos Ghosn traveled to Brazil earlier this month to announce the Kicks, based on a concept shown at the 2014 Sao Paulo auto show, will enter production at Nissan’s Resende plant in Rio de Janeiro state.

The automaker is investing just under $200 million to build the model at the plant, already home to the March and Versa B-cars.

In other forthcoming CUV news, expect an “imminent” announcement for the much-rumored Rogue Hybrid model for the U.S., Bunce says.