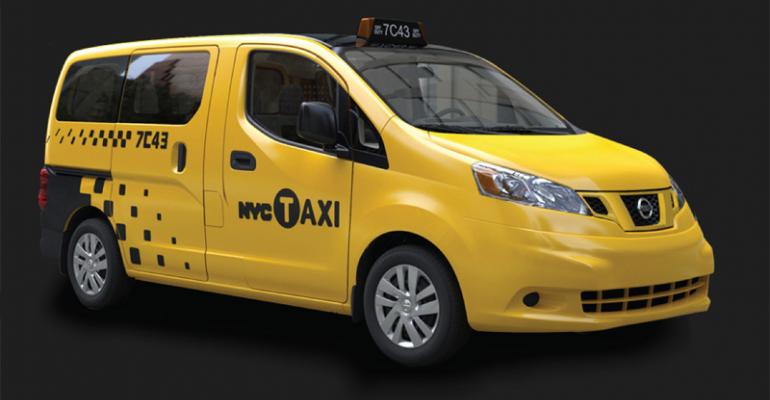 The prototype is scheduled to continue testing until July. The first delivery to fleets and independent taxi owners begins in October. &ldquo;We will start bringing vehicles in at a rapid pace from our Cuernavaca, Mexico, plant,&rdquo; Joe Castelli says.

“We're going to do 2½ times the standard Nissan test cycle for passenger cars,” he tells WardsAuto in an interview at the auto show here. Laboratory testing also is under way in Detroit.

The NV200 Mobility NY Taxi, which debuted at the show and is based on Nissan’s new small cargo van, is scheduled to go on sale this fall and will be available with a rear-loading wheelchair ramp created by BraunAbility, an Indiana-based firm.

The prototype is scheduled to continue testing until July. The first delivery to taxi fleets and independent taxi owners begins in October. “We will start bringing vehicles in at a rapid pace from our Cuernavaca, Mexico, plant,” Castelli says.

He predicts most of the taxis will be bought out of dealer stock, not custom-ordered. New York's taxi fleet totals 13,273 vehicles. “It should take about 4½ years for complete saturation.”

Nissan has 312 commercial-vehicle dealers, but only about 25 of them are located in the Metro New York area.

Fortunately for taxi operators whose vehicles will travel some of the roughest streets in the U.S., one of Nissan's largest CV parts depots is located in nearby Somerset, NJ. Castelli says dealers also will carry five months’ worth of parts inventory, including pre-painted sheet metal.

The retail base price for the Nissan taxi has been set at $29,700. The only thing the auto maker will not supply with the cab is the meter and a taxi TV. Eventually, Nissan could offer an electric powertrain for its taxi, but no final decision has been made.

The national taxi fleet is about 40,000 units, and Castelli says Nissan wants to sell its taxi in all 50 states. “We've talked to (taxi operators in) Boston, Chicago and Dallas, among others.”